Matter Of Mind - A State Of Mind EP 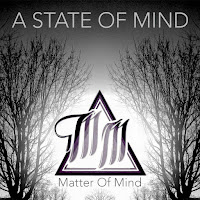 The A State Of Mind EP is the debut release from Stockport four-piece Matter Of Mind. Its three tracks - A State Of Mind, Coffee Stains And Migraines and Silence make up one of the most promising opening set from a band that we can recall. They manage to channel both the freshness of a band starting out with the confidence and assurance of a far more established band.

The EP opens with the title track, starting with the call to arms "where the fuck is my big break, I'm stuck around." Whilst fellow North West big hopes Cabbage are brilliantly rabble rousing and making socio-political statements in their own inimitable way, Matter Of Mind go for the jugular, they talk to the angst and the worries of growing up in a Northern town and wanting to break free and they do it with a gusto and power that very few of their contemporaries can match. The production sounds big, yet clear and concise, the guitars are turned full up in the mix, yet the drums kick such a punch that they're never drowned out. You could imagine the readers of Kerrang loving this just as much as the indie kids that have flocked to Catfish and the Bottlemen and Blossoms and that's a crossover that few have managed to make in recent times.

Next up is Coffee Stains And Migraines, the one song you're more likely to hear on radio at present as it's the only one without swearing, but it's also our favourite on the EP, although that's a very close run thing between all three. It's a little less full on than the other two tracks, but it demonstrates that they've got far more than one string to their bow already. They're not a band that's out there trying to imitate their heroes or fit into a scene and that's what gives them that something special that should have people flocking to them. Its opening hook grabs you straight away and keeps hold, it talks of the uncertainty that swirls around in your head, the endless hours of thinking over stuff whether you're young or old, "you only think too much and chase around the same situation "before coming to the conclusion "and you were probably right the first time round." It's powerful powerful stuff, classic but original structures, subtle changes of pace at just right the moment and great backing vocals.

Silence is the final track on the EP, it being chosen as the lead track a sign that Matter Of Mind aren't about just a hit and run single, but creating a piece, or a body, of work that fits together as a whole rather than the current obsession with one-off focus tracks and little else. It's a trend a few bands are starting to thankfully buck. Silence has a big bold drum pattern running through it, dictating the rhythm and the pace of the song. It's a tale of the confusion around young love and being given the cold shoulder and Jordan writes about this, and the other subjects on the EP, with a clarity that means that people can relate to what he's singing - "Didn't even fight for it. Silence was your friend, it's my enemy" is a feeling we've all had at some time. So much music has an uplifting inspiring feeling to it because it talks to you, turns pain into celebration and that's exactly what Silence does.

There's already a growing interest around the band based on Silence, the first track that was revealed last week, and now with Coffee Stains And Migraines being premiered on Amazing Radio and the whole EP now seeing the light of day, that's certain to multiply. This is a truly stunning first salvo from a band destined for big things.

The EP is currently available on Spotify, but will be available very shortly to purchase both digitally and on limited edition CD.