Track Of The Day : Feral Love - Like The Wind 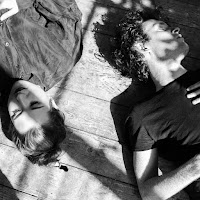 Like The Wind is the debut track from Feral Love. You might recognise the lead female vocal on the track and you'd be right as the band is the new project of former Bird front woman Adele Emmas who has teamed up with Christian Sandford in this exciting new project that's just about to enter the live scene.

Adele's glorious vocal harmonies hit you immediately as the song slaps you around the chops with its big beat and its ecstatic uplifting feel that runs throughout it. It's got an unashamedly big chorus and it's a significant departure from Adele's previous work with Bird. They have apparently already picked up some serious interest on the basis of this first track without playing a gig yet and it's not surprising. If this is their first shot, then we await more with baited breath.