Track Of The Day : PINS - Trouble 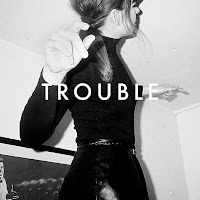 PINS continue their tradition of Record Store Day releases with a 10" single of an exclusive new track Trouble backed with a Bernard and Edith remix of the title track and a second unreleased track called I'll Get Mine. Whilst the band are off touring the US, the song was conceived much closer to home at Strangeway Studio in Salford four years on from recording their debut single there.


Trouble might just be the best thing they've released so far. It has a dark brooding undercurrent to it with Faith repeatedly telling the song's subject "you knew I was trouble" and "you can call me anything you please, but don't call me, sweetheart, sweetheart."

The closer to home recording isn't lost on the band either. Faith commented "There is a nice symmetry to it - we travelled to the other side of the earth to record our last album, toured here there and everywhere then ended up back at home in Manchester. It was weird to stand in the same spot to sing, thinking about everything that had happened between then and now. Trouble was written quickly in our rehearsal room. Lois played this Cramps-esque guitar part and we built it up from there - I thought the music was filthy and deserved some sexy words."