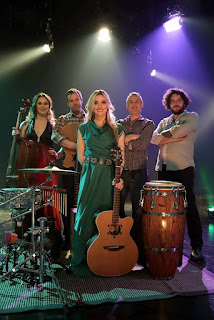 The technology involved in the recording allows the viewer to move around the stage by either using the cursor in the top left hand corner of the screen or by pulling the screen round either using a mouse on a computer or fingers on a phone. For the recording the band performed in a circle facing inwards and the use of multiple cameras and the new virtual reality technology enables the viewer to pick and choose what they see at any particular moment in the song.

Accompanied by Sarah Dale on cello and backing vocals, Mitch Oldham on percussion, Jonny Lexus on acoustic guitar and backing vocals and Jonny Booth on pedal steel, Little Sparrow, aka Katie Ware, filmed two tracks from her stunning debut album Wishing Tree as well as a new track Garden which was being played live for the first time.

Little Sparrow’s website can be found here where you can buy her album and catch up on any live dates. She is also on Twitter and Facebook