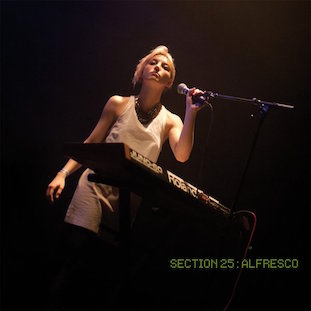 One of the highlights of Record Store Day for us at Even The Stars was the release of a new live album by Factory legends Section 25. Alfresco was released in two formats each limited to 250 copies - one on clear vinyl, the other on black.

Having released their first album back in 1981, Alfresco (recorded at shows in Blackpool and Manchester in 2015) demonstrates that the band are still a potent force. The last few years have been incredibly productive for the band with some stunning records released. The Retrofit remix/reworked LP and the Invicta EP - featuring one of my favourite songs of the last decade (Colour, Movement, Sex and Violence) - being amongst the high points yet somehow Section 25 feel like they're still a best kept secret.

Alfresco comes with an expanded CD to accompany the 8 track vinyl album. Opening on CD with the impassioned electro fusion of New Horizon, it is hard to believe a version of this track first appeared on the Always Now album 35 (yes 35) years ago, thus demonstrating just how forward thinking SXXV were all those years ago.  Old favourites like Dirty Disco and Wretch don't disappoint. Wretch, from the 1984 The Key of Dreams LP is most impressive - a pounding bass line drives the song along as Beth Cassidy delivers a snarling vocal. Yet there is much more to Section 25 and You Leave Me No Choice sees a change in direction and style with Beth sounding more melancholic and their trademark electro sound at a bare minimum.

New songs like Garageland, Inner Drive and Memento are as powerful and essential to the Section 25 back catalogue as those vintage classics. Garageland wouldn't sound out of play in a New Order set - if ever there was a band who can be classed as contemporaries of New Order then it is Section 25 yet the success and acclaim bestowed upon their former label mates has unbelievably eluded them. Inner Drive comes alive in the live environment much more so than in the studio. It has an almost Northern Soul groove. The best is yet to come however.

Looking From A Hilltop, without question is one of the greatest dance records ever and on Alfresco it doesn't disappoint. There's no finer way to bring the LP to an end. The CD continues however with Simon Topping from A Certain Ratio joining on the post-punk splendor of All Night Party. My Outrage closes proceedings in a stripped back, delicate, almost fragile form - almost unrecognisable from the standout track produced on the recent Dark Light album. Yet this new arrangement helps demonstrate what is so appealing about Section 25. Never complacent, always edgy. Alfresco showcases all that is good about Section 25 and is well worth seeking out if you missed it on Record Store Day.

They play Factory 251 in Manchester on 29th April.