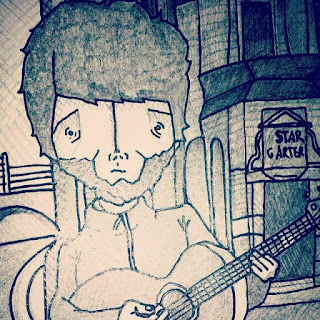 Most Mancunians with their ear to the ground will know of Danny Mahon. For years he's played to packed out venues, picked up some impressive support slots and written songs that capture the spirit and the ups and downs of living in our home town. He's been quiet for a couple of years but is coming back with a headline show later this month and a set of new songs in tow. We caught up with him for a chat to find out more.

You've been off the scene for a while from a point where it felt things were starting to happen, supporting the likes of the Inspirals and Reverend And The Makers. Does it feel like you're making a fresh start again now?

It does a little bit. Not because of the time away though, I think it feels new to me again because I've wrote a bunch of tunes that I think are the best I've ever come up with. I'm really excited about them. I'm also happy in my personal life after years of ups and downs. I feel like I've got some unfinished business to deal with musically. So that's what I plan to do.

You're playing a headline show at the Star and Garter on the 19th.  Will you be unveiling a lot of new material at these shows or will be old favourites with a few new ones added in?

Luckily with it being a headline show I'll have enough time to do both. I'll be playing most of the songs you'd expect and I also have a handful of new tunes that I really believe in and can't wait to show people. Plus I've been working on a couple of surprises for my set too.

Are you surprised by the amount of goodwill there still is towards you?

I'm really grateful that people like what I do. I always have been. It's always surprised me how much people connect with my songs and it's the best feeling in the world to know that they do.

You've played a new song Poplar St on a couple of radio and video sessions.  Could you tell us what inspired you to write it?

I had the chorus for this knocking about for years. I wrote it about a friend who was in a band who looked like they had it all and I thought they were going to blow it - "here's your chance will you take it? Or are you to busy getting wasted, to see what's right in front of your nose?" but it never formed in to a full song. It always stuck around though, good tunes do. I then started writing something completely different about myself and my childhood and it seemed to be a good fit with the chorus which also took on a new meaning to me. I can now relate the choral lyrics it to myself in lots of ways and they meshed together perfectly for the song.

A lot of your songs seem to be autobiographical.  Do they start out intentionally that way or does it just seem to happen?

They just always seem to happen that way. Whenever I try to write something specific or abstract it just doesn't work out or develop. The ones that stick always come out of nowhere but end up being so personal, autobiographical and true.

Has the subject matter of your new songs changed from your older ones?

A little yeah, but only because my life has changed so they always reflect where I'm at in life I think.

Does it concern you that a lot of your songs talk about Manchester specifically and therefore might not connect to people who live further afield?

I was only thinking this the other day. Not for the first time. I dunno maybe they won't but, I like to think the themes of the songs are universal, I just reflect my city in them because that's where I'm at. I'm an extremely proud Mancunian too.

Do you start with words or the tune?

It mainly starts with finding a few chords that sound nice together then a melody follows and words form.

What can we expect from you in the rest of the year?

I'm going to keep gigging and gigging and I also have studio time lined up and I'm planning on releasing an EP in Autumn.

He plays the Star And Garter in Manchester on July 19th. Tickets are available here.