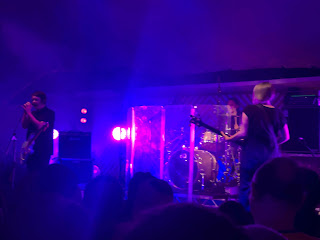 The final night of four curated events by Dave Haslam in the tent in Albert Square for Manchester International Festival saw local heroines Liines take to the stage alongside Norwich's Sink Ya Teeth to delight a packed crowd that had braved the Mancunian rain.

"We caught the train" explained Maria as to why they had no vinyl with them. From Norwich, the world's most boring train journey from personal experience, but by the time they'd taken to the stage they were in a mood to entertain with their infectious joyful mix of electronica and live bass and guitar that gets a crowd moving when the majority of them had likely not heard of them before. That's the sign of a great band that can do that. Between songs they're engaging too, making light of a technical malfunction at one point and endearing themselves to us even more as they quickly found a way round a potential showstopper. 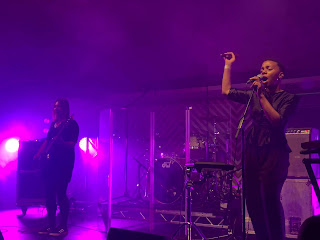 Their set features last year's self-titled album heavily with Petrol Blue, The Law and their closing track Freak 4 The Kick and they even to manage to sneak a snippet of Donna Summer's I Feel Love into Glass, whilst an unreleased song called Shut Down feels like the best of the lot. Maria takes lead vocals, twirling her drumstick round, saluting audience members when not banging it on the pad that gives the songs a thumping undercurrent that's impossible to resist, whilst Gemma's more studied cool and backing vocals take the songs into more rock territory at times. There's a huge roar of appreciation for them at the end and loud demand for an encore that's not forthcoming because of the festival's strict adherence to curfews. They promise to be back soon though to huge well-deserved cheers.

LIINES recently played their biggest hometown headline gig at Yes, but this feels like their proper homecoming. "We're playing in front of the town hall, I'm dead excited" Zoe tells us before adding as modestly as ever "and we're playing Bluedot and Kendal Calling, not like I'm showing off." But they need to shout from the rooftops what they've achieved in the past year and a half - the release of a wonderful debut album that's gained traction over time, a personal invitation from Sleaford Mods to join the huge recent UK tour, performing at Glastonbury and attracting the patronage of the likes of 6 Music's Chris Hawkins and tonight's curator Dave Haslam who proudly tells us he's chosen them to headline at all three of the events he's been paid to select bands for this year.

Credit to the MIF team, the set-up in the tent has been wonderful at all the events we've been too, crystal clear sound and powerful but not overpowering lighting and for LIINES, more than anyone else, this really accentuates how great a band you are because you can fully appreciate the subtleties that lurk behind what might feel like a full-on assault at first - the rawness of Zoe's guitars, the intricate drum patterns that Leila weaves and Tamsin's seemingly effortless bass lines. 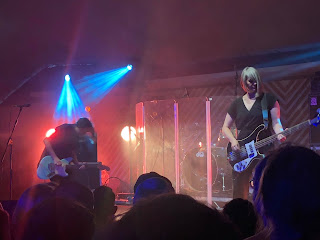 The new material manages to both remain true to the ethos of Stop / Start but shows them progressing. On And On, which opens the set, is a taster for an impressive set of tracks that should make up album number two.  Sorry is full of controlled anger, venom and regret, whilst their final song I'm Not Afraid might consist mostly of one line repeated, it's done in a wall of noise and light that builds and builds and threatens to overwhelm everyone. The old staples - Find Something, Disappear, Be Here, Blackout and Shallow - feel revitalised, injected with new energy as the experience of touring with Sleaford Mods for three months has allowed them to give them an ever sharper edge and focus, whilst Never There, which should in a just equitable world be recognised as one of the finest singles out of our city this decade, even has one young lad who we suspect had never heard of them before up on his mate's shoulders.

The roar of appreciation from the crowd grows as the set progresses and the curious are won over. LIINES are living proof that what great bands need is to be heard to be loved - it happened with The Slow Readers Club and it needs to happen with a few more that are hampered by prejudice on age and gender and the inability of the industry to see past easily marketable acts that do as they're told rather than have attitude and principles. We've seen LIINES thirty-odd times now and this was the best to date. Zoe talked early on about being proud, they should be, we are of them, because they've come so far already against the odds and they're getting bigger and better.


LIINES' official website can be found here.  They are also on Twitter, Facebook and Soundcloud. They play shows with Bis in October at London Boston Music Rooms (10), Manchester Night And Day (11) and Glasgow Mono (13) after festival shows at Kendal Calling (July 26), Cotton Clouds Festival (August 17) and Blackburn Confessional Festival (September 6).

Our recent interview with LIINES can be found here and we reviewed their recent show at Manchester's Yes here.

Email ThisBlogThis!Share to TwitterShare to FacebookShare to Pinterest
Labels: LIINES, Sink Ya Teeth