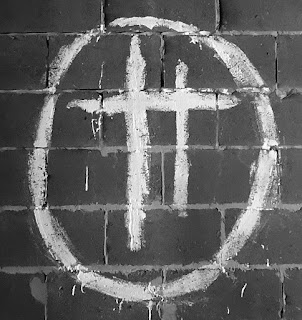 On their Facebook page, which you sense is a reluctant nod to mainstream communication, Vukovar describe themselves as "from the Brutalist wastelands in the North of England. Ultra-Realism. Depravity. Monotony. Concrete. Hedonism. Silence. Vukovar are idealists, voyeurs and totalitarians." As they release Cremator, their seventh album in four years, we try to get behind the mystery....

Your name comes from the Croatian city that was destroyed during the Yugoslav Civil War in 1991.  What made you choose that name - and how do you think it reflects in the band's outlook?

No two people understand the world in the same way. Even tiny differences in experience become large divisions. The history of the world as presented to us, as is available to us, is the basis on which our understanding of everything relies upon. This was a genocide in a modern, civilized Europe, somewhat brushed under the carpet. That's not to say that our usage is therefore political in any way or with any sort of slant; preaching in music is tedious and misjudged horribly. It's usually very very very condescending and from people who really don't understand the topic anyway. Everybody knows what is right and wrong, people are far smarter than needing to be told from some angry young(ish) men with a guitar that 'Tories are bad' 'racism is bad' 'homophobia is bad' etc - see the likes of Idles, The Blinders, any other similar shite you can think of. That's one part of it anyway: the fascination in and the idea of everybody's world being their own.

The other is the aesthetic. The aesthetic of things hold power, some even become a tenuous link to something 'greater'. The image of concrete water tower in Vukovar, bullet holes and all, is one of these tenuous links, with all the weight of all the history that surrounds it resting in its stance.

You're very mysterious about exactly who you are in your internet presence. Why have you chosen to present yourselves that way and do you think anonymity helps to focus the audience on the music?

We're under no illusion/delusion/disillusion that many people are aware of us for anonymity to make anything more than a negligible difference to anything. It has no bearing on the music. - The Self & The Individual have no significance; there is no cult of personality.

There have been references to "The First Death of the group" and "the ending of the Shades incarnation/incarceration" around the release of Cremator. It's all very dark and mysterious - are Vukovar in the process of evolving into something different?

Your artwork feels like it's a very important part of how you present your music. Is that the case and do you design it all yourself or involve other people?

We involve the best when we can - Andrzej Klimowski. One of the finest artists for 40+ years. Also, having just started working with Other Voices Records, we now have another great artistic ally in Oleg Galay. We have done some ourself too, when time has been right. Artwork is vital. Out of all the designs, there is only one record that we had no say in whatsoever. It was more than disappointing. But thankfully we got to move on very quickly and release CREMATOR.

Seven albums in just four years is a pretty phenomenal rate of output as many bands are only getting round to their first album after that time.  Was it intentional to have such a prolific output or do you just record and release when you have it finished?

There is work, there is nothing else. V few people have anything of worth to offer, so they don't, except a couple of half-arsed records over the space of a few years. Everything we have is put into everything we make and every care is taken to make it exactly as intended. It may be prolific but it is not, by ANY means, rushed.

It's a pretty expensive too - where and how do you record?

We had a good deal - Phil & Marie Reynolds of Small Bear Records on the Isle Of Man. For 6 of the 7 lps, we went over there and did it that way. Phil is an alchemist. He knows & understands, deeply, what we want to achieve. On those records, he was just as an important part as anyone else. On the last few, it was more our chemistry together in the mixing rather than the actual recording that we went for. Any money the group makes, from shows/royalties/sales, it all goes straight back into the recording. We always find a way and for the (un)forseeable future we'll do it ourselves, as we did on 4th lp FORNICATION.

Where do you draw inspiration from your songwriting from - and is it a group process or do individuals bring songs to the others?

Anything but other music. It's not important who does what at any given time. The records, as presented, is all we will offer to people. The knowledge of the processes are for us and us alone. Enjoy what we made and what we put ourselves through to make it.

Cremator has covers of Genesis Breyer P-Orridge's The Orchids and The Go-Betweens' Dive For Your Memory. What made you choose to cover these two songs on the album?

They assisted in the construction of the record - see also Charlie Megira's 'Tomorrow's Gone'. They are the 3 Cornerstones for the 3 Shades.

What comes next for Vukovar - are there live shows in the pipeline, and have you written the next record yet?

Preparations for the next four records are in place. Work has been ongoing.

If you were forced (at gunpoint if necessary) to describe Vukovar to an unsuspecting listener who'd never heard of you before - what you would say?

We would also like to add that one of the greatest purveyors of the most beautiful releases, Sonido Polifonico, released 'Decameron (Or 10 Days Of Violence)' from Cremator as a 7" single. Seek it out as an accompaniment to the CREMATOR LP.

Vukovar play London Water Rats on July 12th.  Cremator and other albums can be purchased via their Bandcamp

Email ThisBlogThis!Share to TwitterShare to FacebookShare to Pinterest
Labels: Vukovar