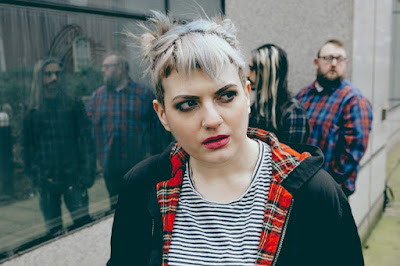 The Empty Page's new single He's Very Good At Swimming tackles the subject of how society views the victims of rape and other forms of sexual assault and some of the high-profile cases where the accused was dealt with leniently despite their guilt because of their social standing. We caught up with them to talk about the single, the message behind it and to find out a little more about the band and their plans.

Your new single He's Very Good At Swimming is a very direct song aimed at the victim-blaming culture around rape cases and the often glorification of the perpetrator and their academic and sporting achievements. Was there one particular story that inspired you to write this?

Kel: Annoyingly, yes, because I don’t really think the guy deserves any more column inches. But anyway, the original idea came from a very high profile case where an American student named Brock Turner raped another student behind a dumpster. While the act itself was (and always is) horrific, what struck me, and many others who read about it, was the way that the courts and press focused on his achievements as a student. He was apparently a very promising athlete. They talked about his swimming times and his great potential and how his life would be ruined by time in prison. All the while, his victim’s life had already been ruined.

This kind of excuse making and playing down of the crime happens a lot, and I believe it happens more with white people. The victim, on the other hand, often finds their life picked apart to find any reason they can hang on them to take the blame away from the person who committed the rape. So yes, it was triggered by that case, but it’s important to note that this kind of thing is far from unusual. Just recently there was another high profile case where a girl’s underwear was used as evidence against her in court. As if that implied she was somehow asking for it. It’s sickening.

The song's title is very striking on its own and gives little away about what the song is about until you hear it and is the last line of the song. Why did you chose that particular line?

Jim: The impact that last line has sums up the whole thing. No matter how baffling the judge saying 'prison would have too severe an effect on him' after only doing three months, or his father's vile 'don't punish him for his 20 minutes of action' line - after any argument given to that, after reading the victims statement, you're just thrown 'yeah but he's very good at swimming', as if they've got their fingers in their ears going 'la la la'. Everyone knows he's undeniably guilty but they'd prefer he was a national hero.

Kel: I like that it’s intriguing as a title, so people might feel inclined to listen to see what on earth it’s about. I don’t think there are any other songs with that title either, which is always good.

It's a difficult subject to broach in a song, in an industry that seems to be increasing shying away from songs that create controversy and have strong opinions, but one that needs addressing. Have you had any negative reaction to it so far?

Kel: Not to our faces, no! I think some people will find it hard to stomach. Musically, it’s a bit discordant, and I guess if people are looking for an easy listening, pop ditty then they might not be into it but a lot of music we love tackled difficult subjects and we don’t really care what ‘the industry’ thinks.

Could you tell us about the making of the video for the song?

Kel: We shot the band footage in an empty unit in Afflecks Palace in Manchester. We wanted it to be us playing but just some fast paced, blurry shots. We asked our friend, the brilliant photographer Debbie Ellis to collaborate with us on it and another friend Liv-Szczeblewska-Moore featured in the non-band footage. We just wanted it to express the meaning of the song in kind of an abstract way, and we wanted it to be flesh coloured and fuzzy. Debbie’s really cool and creative and she did a great job.

The song feels like it's a different style and approach musically for the band.  Was that an intentional change or just the way the song came out?

Kel: Nah we don’t really think about it when we write. It’s never like we say, let’s write a song in this or that style, we just muck about in the rehearsal room and if someone happens to play something cool, we make them play it again and it sort of blossoms from there. I guess people only hear a snapshot of us with the songs we release, we like a lot of different music and we don’t want to write the same song over and over again.

Jim: We'd been playing it live for a bit but we knew it had to sound intense and raw without sounding contrived on record, so once we'd finally got the mixes right we were very relieved. Huge love to Ding and Andy for their patience.

It's been three years since your debut album, is their a follow-up on the way?

Jim: Three years? It feels like a lifetime ago!

Kel: It feels like five minutes for me! At the moment we’re going a song at a time, partly due to lack of funds, partly to try a different approach for releasing music. We might do an album at some point but I think the main thing is to keep releasing new music.

And what else do you have planned for the rest of the year?

Kel: Lots of gigs mainly. We’re quite selective about gigs but we have a whole load of really good ones coming up with bands we think are brilliant. There will also be another single release in Autumn which will come out as a 7 inch record with He's Very Good At Swimming as a double A side.

Email ThisBlogThis!Share to TwitterShare to FacebookShare to Pinterest
Labels: The Empty Page