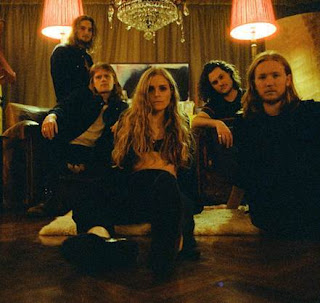 MarthaGunn featured in our top tips for 2018 and promptly disappeared. They've returned though in 2019 with two singles - Saint Cecilia and Love And Emotion. We caught up with them for a chat about their name, what they did in 2018, the two singles and their plans for the future.

First of all, could you introduce MarthaGunn and tell us a little about how you got together?

Hey, we are Abi, Max, Frank, Al and Humphrey. We met in Brighton while studying and have been playing together for 4 years now

Does Abi often get called Martha by confused folks?

All the time! When this happens we introduce Frank as Martha instead. Martha Gunn is actually an ancestor of Abi's

There was a long gap between your debut single Heaven and Saint Cecilia. What was the reason?

We never really intended it to happen that way but we wound up spending a while figuring out what we were as a band and growing a lot as people and as friends. We want to release music that we believe in and reflects who we are.

Could you tell us a little about the inspiration behind Saint Cecilia and what or who is it about?

Saint Cecilia is the patron saint of music. This song was written as a cry for help. Ignoring guidance and resisting growth.

It feels like a very epic song and one that goes through a number of phases, something you wouldn't necessarily expect from a band so early in their career.  Was that intentional?

This song is a bit of a Frankenstein. Most sections were written independently to one another but there was a great moment when we realised they would join together. We knew we wanted the song to feel like a real journey. It all happened quite naturally.

You followed it up quite quickly with Love & Emotion.  What inspired you to write that?

Love & Emotion is  about loving someone and not being loved back how you would like to be. This song was born when those emotions had built up.

Is your songwriting a collaborative effort - or does one of you bring songs to the band - and which comes first the lyrics or the song or does it vary?

Abi is the main songwriter but we all bring songs and ideas. Sometimes a songs comes fully formed, other times we might start from an instrumental idea which we work on together. There is no fixed formula but It’s not a MarthaGunn song until we have all touched it in some way. We are still learning so much about our creative process, it’s constantly evolving.

You recently completed your first headline tour. How did it feel going out on the road as the main act rather than as support. And were there any particular highlights?

It was so much fun! Above all, we see ourselves as a live band and it’s the part we collectively love the most. As it was our first headline tour it felt like a big deal and we were blown away by everyone who came out to support us.

What are your plans for the rest of the year - is there an album or more tours planned?

We’ve just announced another UK headline tour in Sept/Oct which will be the biggest run of shows we’ve ever done. Other than that, we will be releasing more music which we are very excited about.

If you had to describe MarthaGunn to someone who hasn't heard you before, where would you start?

Email ThisBlogThis!Share to TwitterShare to FacebookShare to Pinterest
Labels: MarthaGunn