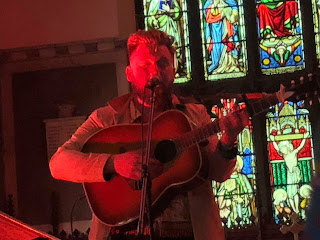 Didsbury Arts Festival welcomed Liam Frost for an intimate solo show in the hallowed surroundings of St James Church on Friday night. A career-spanning set and no shortage of funny and poignant between song anecdotes left the attentive crowd transfixed and appreciative of one of the Manchester's finest ever songwriters.

It's an early start to proceedings as Liam's on stage at 7.45 with no support which catches out a few unsuspecting attendees. The crowd's an interesting mix of Frost devotees and a few of the Arts Festival crowd with both young and old in attendance, one young boy sat directly behind me impressively knowing all the words to songs written before he was born. It makes for a warm and welcoming atmosphere and the show very much reflected that with Liam joking that he can't swear in the house of God, and thanking everyone from Didsbury who wasn't at Glastonbury for turning up to his show and referencing the adjoining Fletcher Moss Park where the tree he references in Skylark Avenue stands and the local Burton Road legend that is Crazy Wendy's.

He starts with Going Steady, from his Latchkey Kid album recently released via the Pledge Music debacle and set for a proper release before the end of the year. What's noticeable most in these stripped-down shows is the continuity of themes in songs, some of which are written fifteen years apart, but particularly the clarity and emotional detail in them, as if they are a means of catharsis. It's why great songwriters connect with people. If Tonight We Could Only Sleep may be shorn of Sadie's vocals and the intricate arrangements, yet it feels even more poignant.

The alternating between new and old continues through the set and, while this might be unintentional as Liam tells us he has a list of songs but not an order, this works perfectly - as Didn't It Rain precedes Shall We Dance which then leads into Hall Of Mirrors, Rope Of Sand. Whilst The Latchkey Kid might well have taken a decade to complete (Liam did release a band album with Tokolosh in the intervening years), it's very clear that time and the frustration of not having his talent make him rich hasn't dimmed the articulate songwriting craft and his third album stands up against both his previously criminally under-appreciated ones. 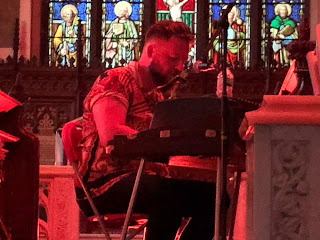 We're encouraged to join in, and we do politely, on Try Try Try before Is This Love sends our pulses racing back to 2005 and Liam's accented vocal that sings "luv" the way we say it in Manchester which makes the song twang those heartstrings a little more as the words feel even more intimate, evocative and personal in the church, and whilst Liam seems to have problems with on-stage sound, it is almost perfect out in the pews.

Pomona, Liam tells us, is not about the tram stop, but about his brother. The recent single is transformed from the album version, peeled right back to its core with the backing vocals and other instrumentation removed to reveal just how personal these songs are, something that if you don't get from the lyrics, you get from the emotion etched across Liam's face. He describes the next new one, Follow You Around, as a "happy" song, making the inverted commas for effect, yet it's still wracked with emotional turmoil.

His debut single She Painted Pictures is a song that he didn't play for a period of his career, but it's warmly received by the Didsbury crowd, many of whom that would have been their introduction to him whilst Skylark Avenue, the only track tonight to be taken from his second album We Ain't Got No Money Honey But We Got Rain, is a beautiful wistful reminiscence that manages to both be deeply personal, but to resonate enough with people's own experiences for them to make a connection. And it's delivered with a voice that's wracked with emotion, yet perfectly capturing detail and accentuating the words in the way it's delivered as the troubadour of his youth has been replaced by a singer who had learned, or simply acquired the ability, to get maximum emotional effect out of the songs. 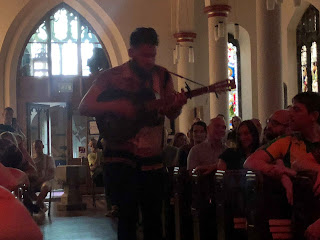 Smoke sees Liam take to the keyboard for one song, which he stops at the first chorus as he's picked up the wrong harmonica. No one minds in the slightest, such is the rapport he's built over time and tonight. He says he was going to do another one on the keyboard, but won't now as he's too much of a "shithouse" which leads to him talking about being on TV with Frank Sidebottom, who he had a phobia of as a kid, and Huggy Bear from Starksy And Hutch and singing along to Frank's song The Great Big Zoo Scrapbook. He slows things right down with a poignant Lover, Trouble Knows My Name, the final song on The Latchkey Kids, and the quietest moment of the night save for the world's loudest hand dryer in the toilets at the back and the odd cry from the youngest member of the audience.

It's followed by the most lyrically affecting song of the night, The Mourners Of St Paul's, one of our favourite songs of all time and one quick look around sees people mouthing the words, eyes closed in many cases, to a song that perfectly encapsulates the way loss doesn't ever go away. Acoustically it feels even more raw, right down to the knuckle and delving into the deepest pits of despair and looking for a way out. The Slow Knife runs it close though, lyrics about cutting deep, but has that most Mancunian of remedies - "come give me a hug."

To finish, and we're ten minutes over the 9pm curfew already, Liam unplugs his guitar, picks up another one and comes amongst us to play two songs completely unplugged in the aisle of the church. When I'm Alone and Who's Gonna Love You are both from The Latchkey Kids and without the aid of amplification, Liam's vocal sounds even stronger. He makes sure he travels the length of the church, mock chasing a woman trying to rush back from the toilet without being noticed. And refreshingly no one tries to take a selfie, stick a camera in his face or block anyone's view by videoing.

We could go on and on about the injustices of how Liam Frost has been treated by the music industry and I'm sure he's heard them a million times before. But we'd rather focus on celebrating a songwriter who we'd unequivocally place on a level with the greatest songwriters to come out of our city and feel fortunate that he's still gracing us with his songs and beautifully intimate evenings like this.