TRACK OF THE DAY : Venus - Sour 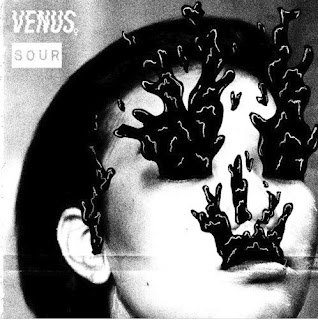 Sour is the second single from Leeds-based quintet Venus, the follow-up to their debut Deranged and one that is sure to enhance their already growing reputation as a band with something to say and that are unafraid to ruffle feathers and create a commotion in doing so.

Sour contrasts sharply from Deranged's full-on assault in the way it feels like it's always on the brink of exploding yet they manage to control the tempo and the mood of the song in a way that keeps the listener on edge throughout. For a five-piece there's a lot of space in the song, rather than throwing the kitchen sink at it like bands often do, the clever production ensures you have separation and can hear the tune and the melodies that often get overwhelmed in the post-punk circles in which their contemporaries mix. At the centre of it all is Grace's evocative and expressive vocals that are living out every single word of what she's singing as if her life depended on it. Reports from our friends in Leeds suggest that the live set is even more powerful than their recorded output and it's not hard to understand why that would be the case.

Sour is out now.