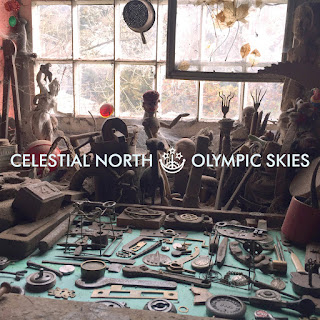 Olympic Skies is the fourth song to be released by the mysterious Celestial North. The single follows on from the previous three - Winter Circle, Illuminate Yourself and The Land The Sea The Human Race - in creating an intoxicating soundscape that draws the listener in and takes them on a journey through a song rich in ideas and changes in direction.

Olympic Skies builds slowly for the first half a minute, before drums kick in with vocal harmonies far off in the distance, then building slowly through sections that resemble short movements in a classical piece more than they do a traditional song - full of drama and excitement, a sense of tension, references to holy trinity and the apocalypse before dropping down back to a whisper.

Celestial North is on Facebook, Twitter and Bandcamp.  She plays at British Sea Power's Krankenhaus Festival at Muncaster Castle on September 6-8.