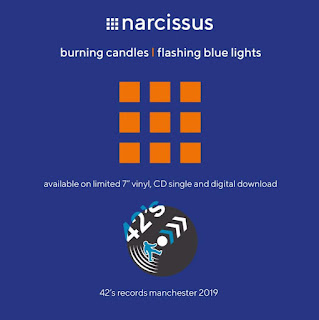 Narcissus were a band tipped for big things in the mid-noughties however the collapse of their publishing deal during the recording of the debut album led to a parting of ways. But as a wise man once said, time is a great healer and 2019 see the release of double A side single Burning Candles / Flashing Blue Lights on new Manchester label 42’s Records. Ste Ackley has a listen to see if the wait has been worth the while.

Burning Candles is a huge slab of anthemic electronica. There’s some big beats on show here and it’s not a million miles away from the likes of the Chemical Brothers in feel, but there’s a “proper” song at the heart of it. It’s aimed squarely at the hundreds of kids who hit the dance floor at 42’s nightclub every week, it’s a floor filler that’s for sure. There’s also a very tasty remix by revered producer Dave Pemberton who’s previously worked with the likes of The Prodigy, Orbital and Kasabian (to name just three) which you should definitely seek out.

The double A-side Flashing Blue Lights is a different proposition all together. There’s still the electronics going on but this shows a softer side of the band and is a good showcase of the depth of the band.

These two tracks are a strong return and we look forward to hearing what comes next.

Now, anyone fancy a Greggs pasty?

Email ThisBlogThis!Share to TwitterShare to FacebookShare to Pinterest
Labels: Narcissus