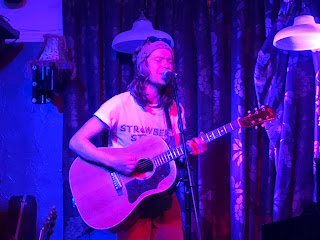 Whatever happened to The Gramotones, Cupids and Darling Club? Well, one of them, Coby Fletcher is striking out on his own, having recently revealed a vitriol-laced commentary on the state of modern politics called Power Never Changes. Julia Grantham caught up with him at an intimate solo set at Manchester's newest music venue The Rose And Monkey Hotel.

What’s in a name do you think? Everything? Nothing? Is it arbitrary or has it got real depth and meaning? Does it change our perception of something if a name changes? Does it matter? Or is it just a thing that happens in life, in business, in music, or on the street? Names were on my mind a few weeks back as I entered The Rose and Monkey Hotel, formerly The Burton Arms on Swan Street in Manchester. I had never been to The Burton Arms, and so the change of name was merely a useful and practical piece of information for me, given the need to frantically enter it into my smartphone, whilst walking quickly to find it, on foot, from Victoria train station.

The Rose and Monkey seems now, if not before, to be a popular and exciting place to be and visit for any lover of live music and a venue to tick off the list for any up-and-coming new artists keen to make their mark on the Manchester scene, and this particular evening, was no exception. Except maybe it was. Coby Fletcher was who I was there to see and yet this name is also new, and the name under which singer- songwriter Jake Fletcher is currently writing, recording and performing. If the name is new to you, it’s because it’s new to us all, and yet Jake has been in band Cupids, formerly Gramotones since around 2012 or thereabouts, before becoming a solo artist and travelling the world as a session musician for the likes of PP Arnold and The Specials. He has gained and retained admiration, respect and a loyal base of fans and friends from the most famous musicians in the world, to a large number of followers from the music lovers of Manchester and beyond.

Entering the small and crowded venue just a few weeks ago, I noticed the atmosphere was warm, intimate and expectant. Family, friends and fans had assumed their positions so as to allow the best view of the tiny stage area by the front window and it many ways it felt like the crowd had been ushered into a large front room, such was the heavily curtained window of the stage’s backdrop, accompanied by an antique-style standard lamp. Cosy, but rich with darkness and a kind of moody dimly-lit space made for an intriguing setting, but one which focused everyone’s attention to the stage. The air was one of eager expectation and yet a sense of nervousness hung over it too.

Opening for Coby Fletcher, Anya struck me as being instantly likeable as a performer. People love it when an artist talks to their crowd, and despite confessing how nervous she was, she performed a wonderfully competent and poignant set of songs about being homesick, about relationships all the while taking the time to tell us about herself, thus making her and her music relatable and allowing us to empathise and will her to keep singing. When her nerves stopped her briefly, she told us how nervous she was, and apologised. I can’t be sure if she heard him, but I saw Jake intently stare at the stage and say “Don’t apologise”, as if to prompt her to keep going, to know it’s ok; we were all very grateful that she did. 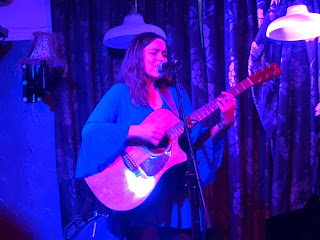 Anya is from Stratford-Upon-Avon, and whilst there may not be any real tangible comparison between her and Shakespeare, there was an element of theatre in her performance; the breathy voice that hit those high notes so delicately, was coupled beautifully with the realism of her songs to give a really compelling set. Songs Gravitate and Fixate struck me as the highlights, not least because their passion came through, At first it was the unwavering delivery of her voice, that captivated us, but it was also the way that she almost attacked the guitar strings to give the maximum sound possible when she played each chord, each note, so purposefully as her melodies unfolded. This nervousness, but desire to play, to express and perform was more than a little infectious and a wonderful tension dispersed throughout this tiny venue, before the space was occupied by Coby Fletcher.

Having seen Jake play and sing before in many guises, there was little curiosity in my mind: I knew he would perform well. Well seems like the wrong word. I no longer feel in such awe to see him, where I once did and yet now, having seen him many times, one thing never fails to ring true: I always come away feeling invigorated and inspired whenever I see him. People talk about Coby at his gigs. Everyone wants to tell their story about when they first saw him, what he does, their favourite song of his, sometimes about how they miss his previous band, there’s always an excitable feeling that ripples throughout whichever room he occupies.

One can’t help but feel a sense of injustice that an artist with such talent, ability and experience is known to so few, and yet no matter how many times I say this, think this, write about this, there’s always that sense that not everyone ‘makes it’ or that talent may only be a small part of what constitutes an artist making that leap from being known on a scene, to being in the public domain. And of course, this sentiment is not merely restricted to music. For every one-hundred actors, artists, or writers, only one or two will get to reach a wide audience and this is simply the way that the world works. But what we may find unsettling in this world we live in now, is that it seems that less and less artists with something real to say, something that could really inspire people if it were to really be heard, so often fails to be given a chance, such is the divide between those with the money and power at the top of the record label chain, and those at the very bottom. 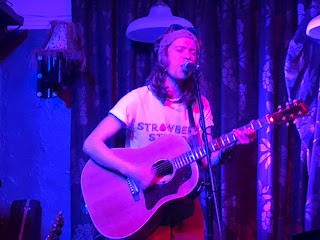 So what of Coby’s performance on this night? I think it would be fair to say he showed a bit more vulnerability than he may have shown before. It can only be imagined that having only fairly recently split from a band, has left him out of his comfort zone, performing his first gig under his new name, alone on stage, where previously he came as part of a four. Do artists quite realise how compelling it is for us, as an audience to witness something so real and honest in a space where there’s nowhere to hide? Especially when what they have to say on stage through their music, moves us to tears, creates memories, and keeps us hypnotised throughout our brief encounter watching them as they take us on a special journey through their music.

Coby Fletcher opened with No-One Talks, a song familiar to those who knew his previous band, and a song all about the void between politics and conversation, that which gets swept under the carpet and the lies that are spread like disease in the very tabloid papers with which are held accountable for wreaking such havoc to peoples’ lives and livelihood. I wonder if when an artist plays a song alone, they deliberately give it more energy than with a full band performance. Coby sang this song with full volume, and percussion was achieved by the meticulous way in which he played his strings. This was a great choice to open his set, given a current political climate full of bewilderment, despair and anger. Did I mention I thought these songs should be heard by the many not the few?

P45 was the next song to be performed, and has a real bluesy / rock feel, I think it’s about that feeling of finality: a door has closed and it’s official. He played it effortlessly and although we might associate the metaphor of that infamous form with a feeling of negativity, he performed it like a new beginning. Perhaps Coby has taken the notion of leaving a job, and turned into an idea of staying the same in a different guise. That’s how it felt this night. And it had a real freshness to it. I could write pages about every song he played, but this blog isn’t mine. It belongs to my friend. And if I want our readers to take anything away from this, I don’t want to it to be incessant fan-based ramblings. We don’t write negative reviews. We write about what moves us, and that which we want to share, because it might move you too. If you’re reading this and you love music, you could have a listen, because that’s what this blog is for. You might like it!

When Jake first published a song on his Facebook page, as a solo artist, it was Young, Gifted and Hopeless. Tonight was the first time I’d heard him perform it. It didn’t fail to take our breath away, it’s possibly the most poignant song ever written by him, and it’s so relatable to anyone who’s ever been good at something, really good, and yet has found it hard to pursue that talent, stumbling across barriers along the way. However the way it was sung tonight, was full of an implied hope to keep going, and to believe in your dreams, your hopes, to do what you love, come what may, even if everyone around you wants to tell you otherwise. If you check out one song by Coby Fletcher, please make it this one. I think you’ll love it. Daltry Street was also played at The Rose and Monkey. I remember talking to the lead singer in a band, about Jake a couple of years ago. They’d shared the same recording space once, and he’d been told that Jake was the kind of songwriter that could write a song like The Las, a song that would become an overnight hit, such is his reputation for songwriting. Daltry Street has been cited in Mojo magazine by Paul Weller as one of his favourite songs of 2014, and rumour has it that Steve Cradock of Ocean Colour Scene knows all the words. You could maybe try to track it down as it's disappeared from Spotify recently. Thanks for reading.