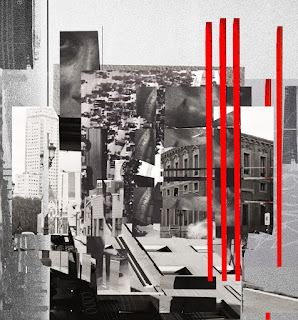 Egyptian Blue, the Brighton-based quartet, have been making a name for themselves the past few months touring with The Murder Capital and releasing three singles - Contain It, Collateral and To Be Felt. They've now released their four-track debut EP featuring those three singles and one new track so we check out if they can convert the intensity of those live shows to record.

The EP opens with Collateral and a guitar sound that veers towards then away from you, setting the unsettling mood of the song and its chorus message of "If you love me you should at home" as "anxiety takes hold" as the song is used as a means of expressing anger and frustration. To Be Felt continues in the same vein declaring "death and ambition go hand in hand, love is but a castle in the sand... your lips make sugar taste like salt" with a real urgency that keeps the listener on an edge. It's something they continue into the most recent single Contain It - the most tight and taut of the three singles so far, short sharp rhythmic drum patterns dictating the pace before the song breaks down and then comes back as a completely different beast altogether.

The fourth and final song Adderall is the only new material here, the one disappointment with the EP if we're being critical. It's more spacious in design, less claustrophobic in its delivery, although the chorus of "we want to live in your broken minds" is probably the most intimidating and threatening moment across the four songs here whilst the last one minute forty of the song (almost half its length) is instrumental and a tantalising glimpse into where they might take us next.

Collateral Damage is a great place to draw the line under the first phase of the band. It captures the unsettling nature of their live performances and leaves you waiting impatiently to hear what they're going to do next.