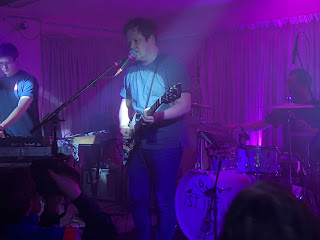 In the middle of writing and recording their debut album, Ist Ist took time out to play a low-key show in the Pink Room of Manchester’s Yes, revealing five as-yet-unreleased songs alongside old favourites from their two EPs and a couple of early singles. Support came from Sheffield’s Fears and Manchester’s own Sylvette. 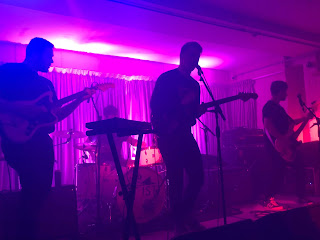 Fears are from Sheffield and this is their debut Manchester gig. Their six-song set opens with recent single Worlds Apart and they trade throughout their set in big anthemic songs that they put their heart and soul into with Joe's impressive voice sat in the middle of it, particularly on Colourblind and their final song Error. They sit a little awkwardly on the bill though, as if they were put on to give them a big Manchester crowd to play to rather than to complement the headliner, but that's not down to them and they get a deserved warm response. 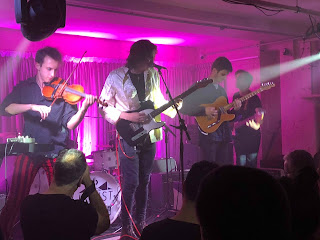 Sylvette tell us they were so keen to play this gig despite members of the band not being available that three of the five on stage aren't actually in the band and learnt all the songs so they could do the show. That's impressive dedication for you. They call themselves art rock and the use of violin throughout really makes them stand out from many of the bands we've seen recently. They play songs from their debut album Waiting In The Bliss and the title track is a particular stand out for us. Engaging and energetic throughout, you sense by the end that they've won over a crowd that's a little dubious at first with an impressive set despite the improvised nature of their line-up.

There’s a real air of expectation in the room as Ist Ist enter the stage, the love for the band very clear to observe. They start with a couple of new songs – Wolves and You’re Mine – that give an insight into the direction the band are taking. Wolves builds slowly with a ferocious intensity that is amplified by the urgency and anger in Adam’s voice, something that is increasingly characterizing their work, a sense that these songs mean absolutely everything and are telling a story and acting as a form of catharsis. It takes them out of any post-punk circle and puts them in the territory of the likes of The Twilight Sad and The Murder Capital where real life is being laid bare, dark feelings and experiences explored and taken apart to act as a form of communal healing for both artist and audience.

They’re followed by two songs from this year’s Everything Is Different Now EP – Jennifer’s Lips and Son Is The Father – both of which fuel that observation. They have a power, amplified from the recorded versions, with the robust rhythm section lifting them and us off the floor. Another new song Discpline is tight, taut and claustrophobic, Adam snapping “what you need is some discipline, what you need is some self-control” with a sense that if you don’t get it voluntarily, he’ll make sure that you do. 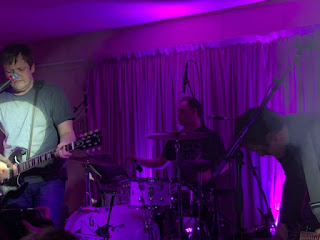 Interlude gives us breathing space, and those at the back chance to talk, before Emily booms around the room, a song that has blossomed and stretched itself from the band’s early days in a manner similar to the band themselves. With so much new material flying around, it steadfastly refuses to budge as a centre point to the set.

Black is the only one of the five new ones to have been played before and hints at a more melodic (relatively speaking) side to the songs they’re preparing for the new album, although its chorus of “what’s left is only black, black” is still as sombre and introspective as you’d expect. Exist is one of the closest moments to the Ist Ist of old, pummeling drums battering the tune that sets the crowd off as the chorus comes crashing in like an all-encompassing wave.

Under Your Skin is the last of the new songs, their most invasive smothering offering to date, suffocating in the tension and menace it creates as it simmers just off the boil. It’s followed by Preacher’s Warning, a song in a similar vein, but one which like the older songs, has been revitalised by the presence of Mat and the way the band have learnt to turn what was sometimes an insular looking performance style out towards the audience. I’m Not Here serves to emphasise that observation as the crowd almost drown Adam out singing back the song’s title to him as it builds.

I Want To Disappear and Undignified make up the second half of the Everything Is Different Now EP and work live best when they’re coupled together, the desolation and despair of the former enhanced by the claustrophobic low roof and unique colouring of the room at Yes contrasting with the way the latter takes off at exactly the point you know it’s going to yet still lifts you off your feet.

Silence is a powerful reminder of their history, the series of singles with which they announced themselves with so belligerently a few years back, its clever chorus line “we’ve been deafened by the sound, silence” a sniping bite at those who ignore them, but one that the crowd take and make their own. The roar of appreciation at the end of it as Adam raises his hands to acknowledge them is one of an audience who have been intoxicated and enraptured by a band that matters to them. They finish the set with Diversion, a twisting winding track that distils many of the various aspects of Ist Ist’s work into one song, ending in an ear-shattering scream from Adam that feels like a fitting conclusion to the evening.

Except it isn’t. The crowd refuse to move and eventually the band are coaxed back out. Night’s Arm is another old song, one that goes right back to their very first demos but which has stuck with them like a faithful old companion, shedding skins and growing new ones as the band has evolved. As it finishes Adam shouts “Rats”, an old crowd favourite, but no one else is shouting for it these days as the band’s development has consigned it, and other songs that would be the highlight of many of their contemporaries’ set, to hazy memory and bootleg recordings. We even forget that they’ve dropped Strangers, probably their most accessible song to date, from the set.

Watching Ist Ist now, supremely confident and with Mat fully integrated into the band, the ecstatic response they get from a fervent crowd means it’s no fanciful extrapolation to envisage them on some of the city’s bigger stages at some point in the future. The barriers to that are not of their own making these days, hemmed in by elements of the local scene that are absorbed in making as much money from bands as they can rather than developing them unless they’re tied down to a percentages contract, of flaky image over substance and radio that’s fed by nostalgia or commercial arrangements. It’s ironic in a week where people are jumping overboard to celebrate the fortieth anniversary of Joy Division’s debut, roundly ignored at the time as they didn’t fit the mould, that the city is still making many of the same mistakes. Slowly but surely thought those walls are coming down and Ist Ist are the one of those kicking hardest at those foundations.