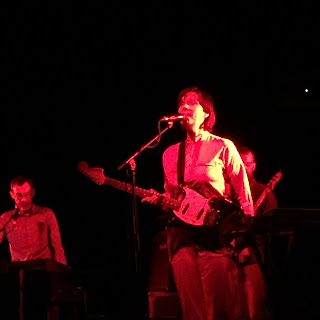 We've been looking forward to the return of Stereolab for some time now. Back in 2009, they announced a hiatus; it was never a split. Tonight sees the first Glasgow show in a long time and it exceeded our expectations. Long term admirer Stuart Ralston heads home for the weekend and reports back.

Before Stereolab take to the stage, I wander round the massive SWG3 complex. I've never been before, but it's an impressive set up - it takes seconds to gain admission to the venue and the bar is huge! Unlike many big venues, there's no problem in acquiring a few drinks before the show. I bump into local legend, musician, singer, songwriter, visionary, record shop owner, all round good guy and front man of The Pastels, Stephen Mcrobbie, and we talk about those early Glasgow Stereolab shows. I first saw them open for The Pastels at King Tuts over twenty five years ago, and I thank Stephen for introducing them to me. Both bands had a similar love for the Avant Garde, for Kitsch, and for obscure pop.

Stereolab always had a strong Glasgow following but tonight's crowd is incredible! The place is packed and the groop (as they call themselves) are playing what must be one of their biggest shows ever - there are thousands here! It's certainly the biggest headline show of their UK tour, partly in support of their reissue campaign, and partly because central figures guitarist Tim Gane and vocalist / keyboard player Laetitia Sadier wanted to get the band back together again. They are joined once more by long time Stereolab drummer Andy Ramsey with newer members Joe Watson (keyboards) and bassist Xavier Muñoz Guimera.

Since the tour began a few weeks ago, the band have been mixing the set up and tonight's show draws heavily from the 1993 period, when they released the classic Transient Random Noise Bursts album. The epic Moog infused, Krautrock of Jenny Ondioline gets the show underway and it's clear that this is no nostalgia trip. It's as hypnotic and pulsating as ever before the more jazzy Brakhage, from the John McIntyre produced Dots and Loops LP.

The tempo shifts up a gear with legendary single, the breathtaking French Disco. A perfect piece of pop, delivered in under 3 minutes yet action packed, with loads of synth, Moog, a frantic guitar from Gane, and thumping baselines from Guimera. Later in the set, Ping Pong does much the same job yet there is so many dimensions to Stereolab. Yes, they can produce classic pop, but they always take the listener to far out places. Few if any band (other than The Fall) could match the output of Stereolab - they released fifteen albums, fifty-eight singles and eleven compilations!

Fluorescences and Miss Modular are much more sedate affair and Joe Watson comes to the fore with his keys sounding as if they've been used to record a whole plethora of TV themes from the '70s. Mood and tempo shifts again with the almost euphoric Metronomic Underground. It has a pulsating, infectious yet simple rhythm section coupled with sci-fi sounds and for me is a set highlight. Anamorphose, from Mars Audiac Quintet, is another big, beautiful tune, with a nod to the Velvet Underground and a real hit with the rather polite crowd. 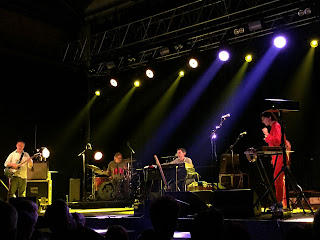 Crest and Lo Boob Oscillator bring the main set to a close. The later builds and builds. It's classic Stereolab - you get drawn in and the sound gets more intense and more mesmerising the more it goes on. Tim Gane stands still, stage left, unassuming, completely lost in the music he and his band mates meticulously craft. Lo Boob Oscillator draws to a close after nearly a quarter of an hour and the band leave the stage to huge cheers of appreciation.

Despite an epic seventy-minute set, the band aren't finished yet though and return to deliver two cuts from the 1999 long player Cobra and Phases Group Play Voltage In The Milky Night - Come and Play In The Milky Way and Blue Milk.

We've always known Stereolab can produce shows of this calibre but we'd never have expected it on this scale. It seems that the decade long hiatus has allowed others to catch up and it is pleasing to see a band we have always treasured gain such popularity. Younger bands could learn a lot from Stereolab. There are no signs yet that they will record new material. Tonight, they didn't go through the motions but pushed themselves and their audience. Long may they continue to do so.

Email ThisBlogThis!Share to TwitterShare to FacebookShare to Pinterest
Labels: Stereolab