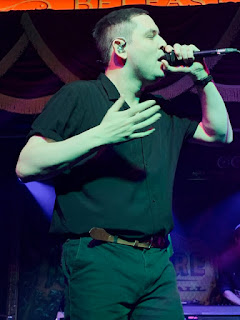 Belfast was the location for an emotionally charged Friday night which saw The Twilight Sad playing the Belfast Empire ahead of their support slot with The Cure the following day at Malahide Castle in Dublin. Jason Wynne made the short trip across the Irish Sea to witness another cathartic evening.

Once you’ve seen The Twilight Sad there’s no going back. You’re hooked.....forever.

A typically raucous Irish crowd, accompanied by those who have travelled worldwide to see their favourites, carried the band along on the crest of a wave that continues to gain uncontrollable momentum.

This was the first Twilight Sad gig on the back of their hugely successful recent American and Canadian tour which saw them woo crowds with their dynamic performances and it was a night both fans and band will never, ever, forget.

“One of the best crowds we’ve ever played to tonight. Unbelievable.....thank you!” was tweeted shortly after the show by the band showing their appreciation of a manic, rabid and totally engaged crowd who gave back the love from the band a thousand-fold tonight.

James Graham has often said “we’re all in this together” and tonight is no different or rather it is because the love in this room tonight far exceeds anything I think I’ve experienced before. Friends old and new hug, laugh, cry, hold each other up, look out for each other as the excitement levels are at fever pitch throughout the whole emotional rollercoaster set.

The Twilight Sad fan site thewrongcar has been instrumental in uniting people from all over the world ensuring no one is alone when you attend a gig or if you’re just stuck at home and in need of a chat or shoulder to cry on in difficult times. The love, the care, the empathy shown in that group has had a massive impact on a hardcore group of the audience, as well as those not present, but missed greatly, who genuinely see the band and fans alike as family. Maybe the family they never had to some. There’s no love too small.

James takes things personally so, after having had to cancel one gig mid-set and the next gig in its entirety on their recent tour, he had taken to Twitter to apologise profusely. He didn’t have to, that’s just what he does. That caring attitude has clearly rubbed off on all audiences and resulted in a barnstorming conclusion to their tour which he was determined, more than ever, to carry on in Belfast. He, and the band, didn’t disappoint with a pulsating 15 song set that left us on our knees, breathless but euphoric. 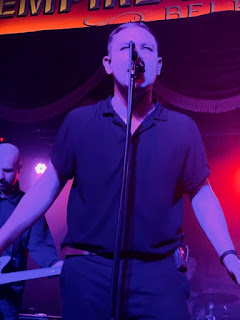 From the frenetic opening of [10 Good Reasons for Modern Drugs] right through to the cathartic And She Would Darken the Memory the band produced a flawless display of raw passion, energy and emotion that resonated with a united audience. The whole set seamlessly peaked and troughed like the mood of band and audience alike. This band make you feel alive. This band make you want to be alive, it’s that simple and very effective.

New, classic, favourites like the stomping Girl Chewing Gum and Sunday Day13 and synth-dream Videograms intertwine beautifully with the likes of setlist regulars Last January, There’s a Girl in the Corner and Cold Days from the Birdhouse. It’s all killer no filler and James puts himself and us through the mill with such an intense performance it’s bordering on the obscene. He laughs, he cries, he beats his chest, he comforts himself, he doesn’t know where to turn or what to do at times. This is his personal space and he’s sharing it with us. What an honour. Every ounce of emotion spent and more.

The same can be said of the passionate crowd right from the front to the very back of this converted church in the heart of Belfast. The congregation is hanging in every word, every move James Graham makes and you can feel the love bouncing off all four walls as the tortured James looks out across the hot, sweaty hall giving us that smile of his, that knowing wry smile, that tells us “you’ve done us proud and I know we’ve done you fucking proud tonight”.

Tonight the band sound more urgent, more electric, louder, faster than in a long time. Maybe it’s just one of those nights when everything clicks right.

James seems crazier but more in control too tonight. Andy is wielding that axe, chopping down everything in sight more frantically, more furiously too. It’s loud, very loud.

Johnny’s bass rumbles along and the foundations of the room seem to shake that wee bit more. Local residents could be excused for thinking there’s an earthquake happening.

Seb is more aggressive, more frantic than I think I’ve ever seen him play. He’s pounding the drums, his face etched in pain, sparing nothing and releasing every last bit of emotion he’s got.

Brendan on keys controls the layers and creates a sonic landscape in the intimate surroundings acting as the glue that retains the noise of all members of the band. Integral as ever to the band’s unmistakable noise.

With this cacophony of noise we get a crescendo of noise back from the audience in equal measures on a night which eventually causes James to shout “Mon The Fuckin’ Sad” in response to a few calls from the enthusiastic first few rows. The applause are rapturous and the crowd are whipped into even more of a frenzy.

The Twilight Sad catalogue is becoming ever more impressive so it’s hard not to mention relative newbies like VTr with its “no love too small” message, Auge/Maschine with its emotive lyrics and the bouncy Let/s Get Lost being completely off the scale tonight. Then we have the likes of Reflection of the Television which will always go down well with their loyal, vociferous support....James purrs “and sheltered from the weather you could be so bold, you told me it'd get better, and i know you're old”...gets me every time. 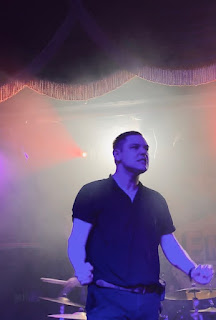 The last two songs of the night sum up the family vibe of this band and the intense, emotional atmosphere of the evening.

You know what’s coming and it’s going to hit you like a juggernaut like it always does. There’s nothing you can do about it. Keep Yourself Warm has this magnetic power to unite people, images of a crowd arm in arm, swaying together, emotional crutches for each other, for James too as he pours his heart and soul out on stage in memory of his great friend Scott Hutchison. From the depths of despair the band manage to lift us mid-song from the doom and gloom and tears to offer us all hope and salvation we all crave - and there’s smiles too. It’s defiant and every single person in that room feels it. It takes literally everything out of James, band and crowd.

His bravery as he fights back those tears to introduce And She Would Darken the Memory are enough to make anyone cry. And there are tears. Lots of them. But we rejoice, we sing one last time in unity. It’s evident that this connection between band and crowd has hit another level tonight that makes music that special thing it can be. Therapeutic, cathartic, meaningful, the lifeblood and more, the oxygen for some and it’s simply magical.

As the song ends we see Seb march over to the front of the stage and give his drumsticks to one fan. One over exuberant fan tries to take the sticks from the intended recipient but Seb ensures the right man gets the prize. The Twilight Sad family are on hand to ensure this happens anyway, looking out for each other from beginning to end.

As we wipe away the tears, we embrace strangers, friends and even members of the band as emotions remain high after one of those special The Twilight Sad nights.

There’s nothing much more to say than to thank this band on behalf of all their fans for helping us cope in our own ways with this fragile thing called life. There are newbies, there are seasoned travellers, all in agreement that once you’ve got the taste for this band there really is no turning your back on them as you’re hooked, part of the family, forever.