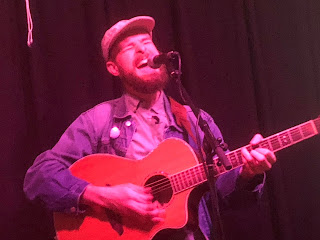 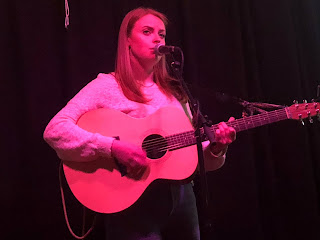 In the process of writing his second album, Lewis Fieldhouse made the journey up from his adopted London home to the lounge of Gullivers to roadtest new material as well as play tracks from his 2016 debut album Theodor Washington And The Central Valley ably supported by Manchester's own LYZA who is preparing the release of her new single Regret.

There could be a number of reasons why LYZA has gone under the radar for so long; she rarely plays live under her own name despite providing backing vocals to many of her friend's bands, she has a modesty that very much hides the light of her beautiful voice under a very thick bushel and this city's disappointing reluctance to engage with its many talented female singer-songwriters. So the prospect of a rare solo appearance that has no empty seats in the intimate surroundings of Gullivers' wonderful little back room, surely one of the city's hidden gem venues, was something to really look forward to and LYZA did not disappoint.

Many of her songs deal with, as she openly tells us, the aftermath of falling in love with her best friend. The songs are rich in emotional honesty and soul-bearing, as if they're the remedy to the ills, and are delivered with a voice that one minute is strong and soaring, the next so delicate and fragile, that you feel like she's reliving the stories again. She's funny too though, laughing at her own misfortune in the situation she found herself, telling us after a glorious take on next single Regret that she'd forgotten there was a guitar solo in there that wasn't hers and that, with a new song called War, she'd finally written a song that wasn't about that lost love. 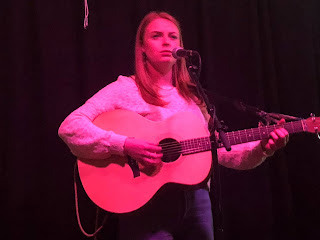 She finishes a well-received set with her last single Sya and when she's distracted by someone coming in the room she's initially fazed and recovers with a huge grin on her face that makes the crowd warm to her even more. All we need now is for her to realise how great a singer (and writer) she is and the wider scene to open its eyes and we might all get somewhere.

We know nothing about Lewis Fieldhouse at all before he comes on stage, but he changes that over the course of forty-five minutes as he tells tales of hate and self loathing in South London, raucous tales of sexual encounters in various places, has us clapping and singing along to songs we've never heard before and has us on the edge of tears as he relates how his mother is in a hospice with terminal cancer in a song about a date where that made him break down.

He's self-deprecating and honest in the tales he tells, from the opening song where he declares I Fell In Love And Fucked It Up and, for extra impact, adds the word "again" to the lyric repeatedly, takes aim at his own insecurities and weaknesses with such clarity that you'd expect him to be able to resolve them were the human condition that simple to unravel and piece back together. 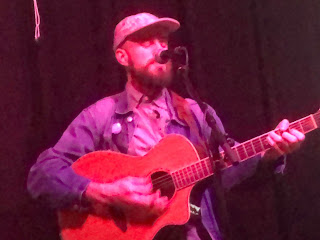 He often expresses a dislike of London, but then in the songs very much reveals that it's a love-hate relationship, that the ability to perform music there is what drives him and takes him out of the sadness he refers to at points. And it's here where people connect deeper and listen intently, because music is being used as the antidote to everything bad in his head and, more importantly, the heart-wrenching experience he's going through where he struggles to hold himself together.

His songs are intelligently crafted, often vivid in their detail via his choice of words and the pacing of the them adds to the impact, something that songwriters can often forget is a major weapon in their armory. Add to that his ability to tell the stories behind them with a clarity and candour that many can't achieve and you see far more depth to him than you might first expect.

Lewis Fieldhouse's official site can be found here and he is on Facebook and Twitter. He plays Leeds Wapantake on Friday (June 7).