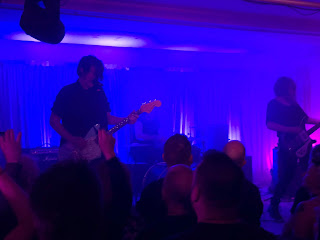 LIINES finished off their triumphant first half of the year in style following their tour with Sleaford Mods, the release of new single On And On and their biggest shows to date with a hometown show at Manchester's Yes that both celebrated the end of the Stop - Start album promotion cycle and heralded a set of new songs that will form the basis of their follow-up. Support came from Reckless Yes label mates Pet Crow and Blanketman.

Pet Crow's set is short but sweet, too short for our liking, twenty minutes of six songs from their debut album A Simple Guide To Small And Medium Pond Life as well as new material from the two years since its release. They might look a little awkward on stage, showing a refreshing indifference to the need to strut and pose, but that merely adds to the way they utterly charm the growing crowd with direct spiky songs like How Are You Wired and Insomnia as well as their closing track Pressure Sores. Danielle's voice is at the centre of things, rising out of the sharp cutting riffs that her bandmates create and there's a real togetherness that's very clear, even with Connor standing in on bass for the absent Sophie. 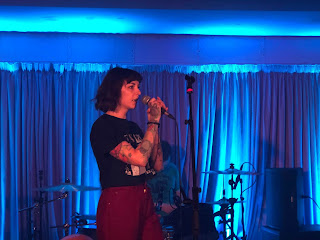 This is our first time watching Blanketman but it certainly won't be the last. Back in April last year we described their debut single The Long Arm Of Entrapment (absent from the set tonight along with their other single Sick And Tired as a sign of the forward momentum that's driving them) as "It's a refreshing change to listen to a band to whom sounding polished and shiny is an anathema" and to an extent that still holds true. They're always in complete control of these songs, like opener The Call of JD Wetherspoon and Full-Time-Part-Timer that are two of the highlights of a set that doesn't really have any dips at all. 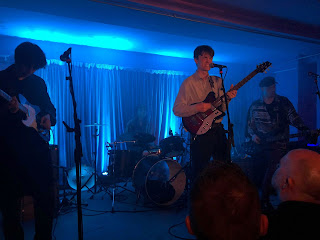 Agitated, driven along by Ellie's drumming that simply demands your attention, edgy and direct in their approach and not lacking in a bit of acerbic commentary as 5 Days A Week with its "same old shit" chorus musing on the drudgery of the nine to five. They somehow manage to sound immediately familiar yet cleverly original at the same time, helped by Adam's unique vocal delivery that ensures you know he means what he's singing. The crowd absolutely love them and they've set the bar high for our headliners.

LIINES are on a roll though, their punishing schedule and the universally positive response they got on tour with Sleaford Mods has given them the confidence that they sometimes lacked in their own ability and on home ground they've got an adoring fan base that are willing them on now some of the doors that had been kept shut on them have started to open up and they're kicking their way through them.

They start with Nothing and Hold Your Breath from Stop - Start before delivering current single On And On, which has seen the buzz around them intensify exponentially. The most exciting observation though is that it doesn't stand out particularly from the other five new songs that are played tonight - two of which, Sorry and the first of two untitled ones, in particular suggest that they're in a rich vein of writing form. The songs are both unmistakably LIINES in their construction, tight, taut and with a powerful kick to them but at the same time a genuine progression. 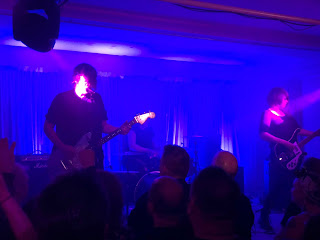 Stop - Start's run of brilliant singles - Blackout, Shallow, Be Here, Disappear, Find Something and Cold - are strategically placed around the set to give the audience a sense of familiarity and they conclude with their debut single Never There, a song that never fails to increase the heart rate and one that will go down as one of the most underrated songs ever to come out of Manchester, and a wonderfully short but bitter-sweet new one Not Afraid.

What's so brilliant about LIINES is the way they keep things simple, they don't go for show, extended solos, experimental pieces or image, they rest firmly on the quality of their songwriting and the manner in which they deliver them. Sixteen songs take about forty five minutes to run through, as exhilarating and exhausting for us as they are for Zoe whose trademark breathlessness along with Leila's drumming that's so powerful she involuntarily ends up standing at the end of a couple of songs is a sign of a band that puts absolutely everything into their set, heart, body and soul.

Watching LIINES now with Tamsin fully integrated into the band and playing songs she was involved in writing makes it feel like they're a gang like so many of the very best bands are. There's a feeling that their time might just be now with the support of 6 Music adding to that of Radio X, but it's live where they're at their best, when you can see the whites of their eyes, feel the unstoppable momentum of their songs set your own pulse running. They seem overwhelmed by the response they get, as modest as ever about their talents, they had better start getting used to it though.

They support The Membranes at Manchester Ritz next Saturday (8) and then play festival slots at Kendal Calling (July 26), Cotton Clouds Festival (August 17) and Blackburn Confessional Festival (September 6) with more dates to be announced soon.

The single On And On is available to purchase from their Bandcamp.

Our interview with LIINES can be found here.