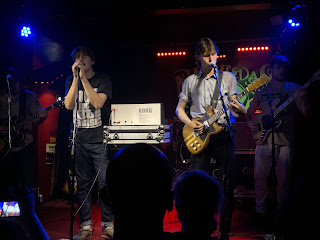 Three of the most exciting bands on the Manchester scene came together on a hot sweltering night to raise funds for the family of Liam Smith who passed away recently in Australia. Cabbage and Afghan Sand Gang both paid heartfelt tributes to their friend during the course of the night.

Liam's untimely death left his family with a huge repatriation bill and Cabbage's aim was to hit the final £20k target with this benefit gig that all proceeds going to the fund. Announced last minute at the end of last week, it sold out immediately and the Night And Day was packed to the rafters, reminding us that it is still the place in Manchester for a hot and sweaty show.

Opening up is Thomas Haywood, front man of The Blinders, with an acoustic set that shows a side to him that you certainly wouldn't get from a full band performance. Stripped down and acoustic, we're immediately struck by the emotional power and strength of his voice as he starts with a gorgeous Ballad Of Winston Smith. 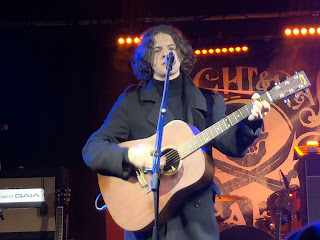 This isn't a Blinders show though and the next three songs are his own, displaying a more vulnerable side to his songwriting, although the first one, Circle Song, is described as being about "Clint Eastwood's spider web of daydreams." This Phantom Lover and I Will Always Be There do deal more in the personal than the band's work to date, yet the same descriptive traits in the songwriting are very much present. He covers Dylan's Ballad Of A Thin Man, a brave choice given it clocks in at around six minutes and at one point he forgets the words but ad-libs his way brilliantly out of trouble by alluding to it in the line he improvises.

He finishes though with a band track, but not an obvious one, a stripped down raw version of crowd favourite and non-album track Ramona Flowers concludes a rare acoustic outing and a perfect opening set for a night that is about more than just the music.

Afghan Sand Gang are next up and they start with a whole load of technical troubles that mean they have to improvise an instrumental opening that for us works really well as it builds the mood for what's to come and pricks the ears of the curious as to what the band are about. 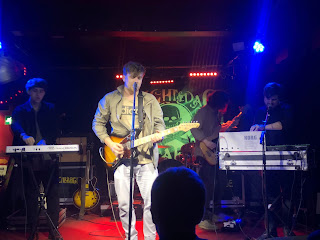 We haven't seen them live for nearly a year and we're immediately struck by the progression they've made as a band, now a four-piece for their live shows. Songs like their two openers, Mantra and Scribe from last year's debut EP Machine Music, feels bolder, filled out and more adventurous, allowing them to still stand up against more recent tracks like their last single Envy.

There's room for two new ones, one we don't catch the title of and a second one called White Lines that we think is a sure bet to be a future single that show that they're out there exploring new sonic channels whilst retaining much of what makes them such an intriguing and different proposition in a guitar-fixated city. They finish with last year's single Glistener and Descension from the debut EP, both of which confirm that earlier observation of them being a band that are constantly pushing the boundaries of their sound but without losing sight of what makes them a unique proposition in these parts.

Cabbage don't mess about tonight. Their hour-long set is simply a greatest hits so far run through their best loved tracks from their EPs and their debut album with recent single Trouble thrown in for good measure. The nature of the event and the sauna-like conditions of the Night And Day might mean the set doesn't quite have the chaos of the sets they played in venues like this on their rise, but there's still an anger and energy running through what they do. Uber Capitalist Death Trade, Arms Of Pleonexia and Terrorist Synthesizer ("another one about politics I'm afraid, sorry" Joe says with little sign of any remorse) set the front rows bouncing and remind us that politics and music can still mix and impart something to the audience. 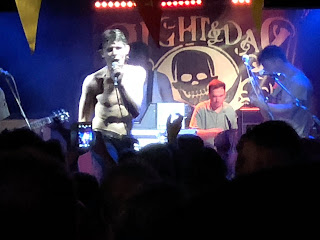 Dinner Lady and Kevin go right back to their earliest singles, the former still as tongue-in-cheek brilliant as it's ever been as a shirtless Joe postures and poses in dramatic fashion, whilst a majestic rambling Tell Me Lies About Manchester is dedicated to Ray Boddington of the Piccadilly Rats and as they reach the line where two hundred and fifty people yell "The Piccadilly Rats were the ones who created the ecstasy pill" the band stop playing as if to emphasize the love.

They finish the night with the crowd throwing themselves round to Necroflat In The Palace and its call to defend the institution that is our National Health Service from the predators that would seek to take it from us, improvising the spectre of our likely future prime minister Boris Johnson in the middle section, before they encore with a cover of Nancy Sinatra's These Boots Were Made For Walking.

The night isn't really about music though. "This is for our former comrade Liam Smith. I love you" is Lee's introduction to Necroflat In The Palace, an important statement given the sickening number of men succumbing to mental illness because they're afraid of showing their real emotions and put on a face that hides and worsens their condition. Talking is important, admitting you're struggling is not a weakness and telling your friends you love them is a strength and might just make a difference.

Donations can be made to the repatriation fund here.