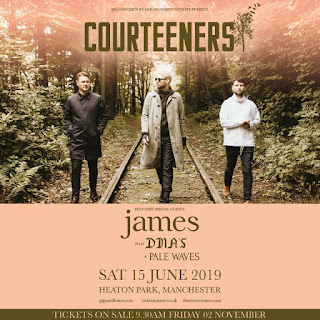 "50,000 people in our back yard" was how Liam Fray described Courteeners' homecoming of sorts at Heaton Park on Saturday night. As the clouds that had threatened a mudbath dissipated and the air filled with the choking smell of a thousand or more flares, they cemented their place amongst the giants of the city's rich musical history, as the band of this generation.

James are the main support, an extension of a mutual appreciation society that dates back to when St Jude and their comeback album Hey Ma were released on the same day in April 2008 and Liam and Tim met regularly on the promotional circuit and then Courteeners both covered Out To Get You and still to the day include a snippet of Tomorrow in the live version of What Took You So Long? Back in their commercial heyday they would have been the band that the teenagers and not so young would have made this pilgrimage for, and still close to three decades on they're still playing arenas and tonight they show why.

They start with Sit Down, a wise choice given it's their best known song, and as soon as the first line kicks in we can't see the stage for smoke. It's a song of communion, coming together and perfect for a huge field like this. Tim makes his way down on to the barrier, a brave move given this isn't their crowd, but that's what James do and their setlist choice shows this. They could have rested on their mighty laurels and played a greatest hits set, but their longevity hasn't happened by accident. So we get a glorious Leviathan, a sleak and winding What's It All About, a euphoric Many Faces and a raw edgy Heads from their last album Living In Extraordinary Times rather than a hits by numbers set that most bands would play in this situation.

There is of course still plenty for the old-school fan in the set. Out To Get You, preceded with touching praise for Courteeners' version whilst Getting Away With It (All Messed Up), Come Home and Sometimes provide a reminder of their long and glorious past. Tim spends half the set down on the barrier, diving in the crowd at points, creating a connection with those at the front, but possibly detaching from those who can only watch on the screens. Such is the difficulty of a support band at an event like this. 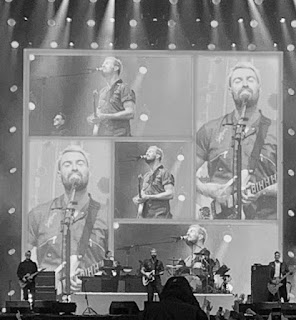 It's Courteeners night though. That a band can get 50,000 (mostly) young people in a field is a massive achievement, made more impressive by the dismissive coverage they've had from a London-based music press that sneers at the way they connect with the working class kids of their city and further beyond. Heaton Park has seen Oasis and The Stone Roses here in the past, but both on a nostalgia trip rather than talking to the audience in the here and now. Even the easy trick of coming on to Oasis's Morning Glory can't hide that simple fact.

We can't see the stage throughout the opening song Are You In Love With A Notion? but it doesn't matter. Live music is about the experience, the buzz when the band starts to play and everywhere around us people are having the time of their lives, the mud, the prospect of a four-mile walk back to the city forgotten for an hour and three-quarters. Courteeners have tapped into the psyche and the hearts and minds of the disaffected youth that want a voice to talk for them and to them. Whilst their demographic might be very much Mancunian slanted, the accents we hear around the site all day very much suggest their reach is broader and deeper.

Whilst it's the big songs from St Jude that get the huge response at the end as people throw their last remaining bits of energy into Not Nineteen Forever and What Took You So Long?, the set reminds us of the substantial back catalogue the band have amassed. The likes of Lose Control, The Opener, Van Der Graaf, The 17th and the battered bruised romanticism of Northern love song Take Over The World both feel made for this huge stage and ensure that the crowd's energy barely dips throughout. 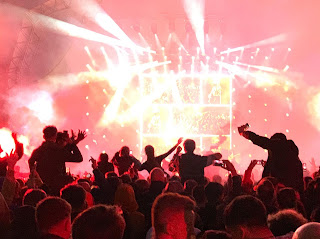 The likes of Acrylic, Bide Your Time and Cavorting still set the blood running through the veins as fast here and now as they did twelve years ago when Courteeners were making their first breakthrough and large sections of the crowd were still in primary school. Even the acoustic section where Liam takes old b-side (and pseudo Stephen Fretwell cover) Smiths Disco down to its bare bones, the audience pretty much drown him out.

There's new material too, and although it's hard to judge it in these surroundings, there's an immediacy to Better Man that suggests their forthcoming album will be as loved as its predecessors, whilst Heavy Jacket sees them expanding their horizons, a harder coarser sounding edge to the song than those around it in the set, but a progression rather than a diversion.

As the last notes of What Took You So Long echo around the park, Liam makes his way down to the barrier to greet the adoring hordes of fans who see him as their spokesperson. Throughout the gig his face flashes up on the big screen and he looks like he almost can't believe his luck to be doing this with his mates and probably audible over in Middleton where he grew up. They have their detractors, the ones that turn their nose up at their fervent fan base, that don't understand that music isn't just an art form but a way of forging connections, of forgetting all the shit in the world for the three minutes of a song that talks to you about your life, your problems and tells you that it'll all be alright in the end, but they're completely missing the point. God bless the band.