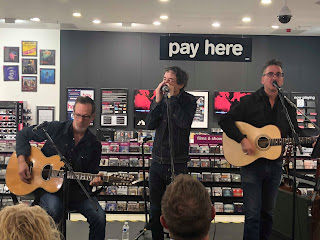 To coincide with the release of his Top 3 album Further, Richard Hawley has been playing a series of acoustic in-stores to promote the album. Monday night saw Manchester's turn and the surreal sight of an artist who sold out the Albert Hall almost immediately play in a brightly lit room surrounded by CD shelves.

It's certainly a strange feeling to watch Richard play a space like this and you suspect the feeling is one that is reciprocated as his usual jovial between song chat is kept to a minimum, other than asking us if we've all come from work or whether we've been at home indulging ourselves and bigging up long-term friend Clive Mellor, who he met a few hundred metres from here in the Castle Hotel years ago and who joins Richard and Shez for the last two songs of the set. 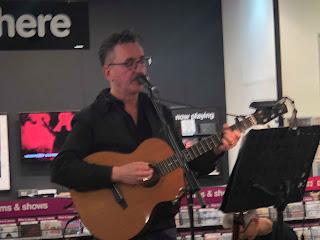 The set is a mix of the old and new from across Richard's career.  Five old favourites - Just Like The Rain, Tonight The Streets Are Ours, Standing At The Sky's Edge, Something Is and Heart Of Oak - represent five separate albums, going as far back as 2001's Late Night Final. The stripped-down format and the surroundings somehow make the despair of Standing At The Sky's Edge feel even more taut and crippling, as Richard's ability to craft lyrics that perfectly capture human emotions in a way that few others can. Tonight The Streets Are Ours is still replete with a buoyant optimism, that although life might be a bit shit, together we can make moments that transcend that. whilst Just Like The Rain, with Clive adding harmonica, is drenched in battered and bruised romantic intent. And all of it weirdly feels accentuated by the intimacy of the situation. 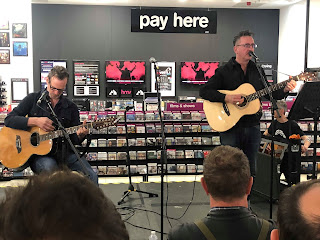 We're here though to hear tracks from Further and we get four - Is There A Pill?, Emilina Says, Galley Girl and the sublime My Little Treasures. It's a record that sees Richard reinventing himself again without straying from his roots or compromising his songwriting craft and the attentive audience respond by greeting them with the same appreciation as the old favourites around them in the nine-song set. Nearly twenty years into his solo career, it feels that Richard is still pushing upwards through the glass ceilings that restrict artists of his age and those that remain true to deep set traditional musical approaches rather than gimmicks and production trickery. In this room where there's no hiding, that feels even more apparent than ever before.