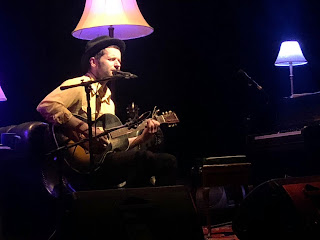 The last night of David Ford's solo stripped-back tour took him to Darwen's Library Theatre for a two-part set that both acted as a retrospective on his career to date as well as a fascinating insight into the stories behind the songs, his songwriting processes and events that shaped him both as a musician and a person.

There's just a squeaky leather chair, a guitar, piano, table and three lights on stage tonight rather than David's usual collection of hand-made instruments, loop pedals and other unique instruments which makes for a special occasion, in fitting with his now fifteen year tradition of trying to give the audience something new with each and every tour. And tonight he most definitely succeeds in doing that.

Before starting he tells us he didn't know where Darwen was until he typed it into his sat nav this morning and how a five and a half hour journey became a ten hour one due to the delights of the M6 on a Friday night. He's immediately on good form though, chiding playfully people walking in after the unfeasibly early start of 7.30 that caught a few people out, joking that there's no support band playing Mustang Sally and other covers tonight.

One Of These Days, often performed as a duet, feels more poignant as a solo track, the pathos in the song accentuated to the point of heartbreak. As he tells us later, his songs have a knack of hiding their true feelings, sad-sounding songs are happy, happy-sounding songs are sad, yet this one is more wistful as it ponders which might happen if the song's protagonist pulls their finger out. Another recurring theme is his refreshing view on his own career and those around him in the dog eat dog world of the music business and Real Damn Slow takes aim at the here this morning gone this afternoon nature of the industry these days and allows David to show off his fine guitar playing skills that often get overwhelmed by the technology used in creating his sound.

Train is accompanied by an amusing anecdote about the song's resemblance to Desperado by The Eagles, pointed out to him and the label when the song was being pitched as a potential single and performed live in session on Simon Mayo's Radio 2 show. He demonstrates at the end a countrified version that was more in keeping with the style of the original version of the song which had been rejected by the record label, attempting his best Hank Williams impersonation in the process.

He continues with Waiting For The Storm, a song he jokes he didn't copy from anyone, from his third album Let The Hard Times Roll, another song that stripping back to its core gives us a new insight into and it's accompanied with a tale about a mystery CD he was given on another US tour that included a twelve-minute doo-wop acapella song that was at the same time horrific but strangely addictive. 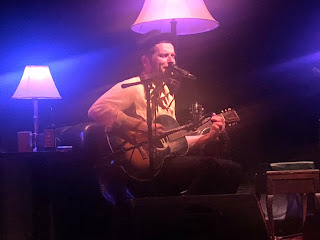 He gets asked a question from the audience, as he encourages interaction in these shows, about whether he feels his old songs, like State Of The Union which he doesn't play in this pared down format, would sound better if he recorded them now. He gives a very measured response that he would play it better, but that it might lose the fire and anger that a twenty four year old would give it. We note that a twenty-four year old David Ford would have shied away from this type of interaction, but this open and fascinating insight he's giving at these shows is a real rarity that the audience respond to in kind.

Animal Spirits feels even more like a condemnation of the global financiers that have caused the waves of austerity that have caused tsunami effects across the world and in many ways the lack of sonic enhancements recreates that rage of his early years. It's followed by his second ever solo single, I Don't Care What You Call Me, a song that goes back to the break-up of his band Easyworld who preceded his solo career, rather than a relationship break-up that you'd assume on first and subsequent listens. He finishes the first half of the set at the piano with O'Sullivan's Jukebox, a reflective look-back at the pub in his hometown of Eastbourne that forged his musical education and love of Guinness that the landlord, he recently found out, lost in a single hand of cards. He ad-libs the line about being a mean centre half to tell us that "I could have been the rock of the Blackburn back four, and god knows they need it" to the amusement of the crowd.

The second half of the set opens with Why Don't You Answer Your Telephone, one of the standout tracks from last year's Animal Spirits album. It feels like the break has given David renewed fire and energy, despite remaining seated, as there's a real harsh edge to the way he plays guitar that really hammers home the song's desperation.

He then tells a story about a tour of the Southern states of America around the time of his second album where he played to single figure crowds (and one show where no tickets were sold) travelling around staying in crappy hotels, driving a thousand miles in pouring rain with his one pair of shoes being permanently wet. He gets to the end of the story and tells us he wrote a song - Pour A Little Poison - about his experience and that it was all worth it for that song and everything slips perfectly into place. 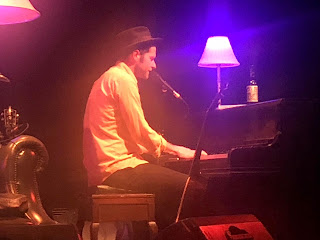 Poison is the first of a series of songs that have a recurring theme - that the mood created by the music can often contradict that of the lyrics. To Hell With The World might seem like a mournful piano ballad, but any doom that might be lingering from the verses are dismissed forthwith by the solemn declaration of the chorus that "to hell with the world, I still love my girl." The series is broken for Stephen, David's tribute to the Northern Ireland policeman Stephen Carroll murdered by dissident republicans back in 2009. It's a truly heart wrenching song that never fails to move the audience to tears such is the way it captures the pain of loss and the futility of it as he quotes his wife Kate's words "a piece of land is just a piece of land" in the chorus.

Fireworks, like To Hell With The World, is a song played on the piano that on first impression feels mournful, but which comes round to the endurance of love and still having a spark after time. A new unreleased song, possibly called When We Were Young, however starts off miserable and descends further into the abyss, reflecting on the death of a loved one.

There then follows more questions and answers, the first asking who David's favourite fellow musicians he's played with are. He recalls Elvis Costello and Allen Toussaint who he supported back in 2005 and didn't realise the significant or impact of who he was playing with, his good friend Jarred Dickenson as well as a difficult tour supporting Fiction Plane. He reveals that he discussed recording a version of Two Little Boys with his good friend Tom McRae, but they decided it wasn't wise given the stories that emerged about Rolf Harris when asked about guilty pleasures, also telling us of his love of the likes of Phil Collins and The Bee Gees.

Always one to take his brushes with success with a shrug of the shoulders, he tells us that he can now add "award winning songwriter" to his name because of Johnny Hallyday's 20 Ans before playing I'm Alright Now, his "less successful English language version of a massive French hit."

He finishes with two songs that consider the life he's chosen to take, emphasising the fact that "I Chose This" that became the title of his book several years back, but also the key line to both Song From The Road and Every Time.  The first was written in the touring phase of his debut album, when he'd pack up his car with whatever gear and friends he could fit into it to go and play gigs anywhere and everywhere with no worries in the world and the journey home to his new wife. It paints a beautifully idyllic picture of doing something for love rather than money and fame.

Every Time effectively became the soundtrack for his book, as he recalls all the opportunities that came his way that he missed because he was more focused on loving what he was doing than he was about submitting to the man and losing everything that was so special about those times. The songs builds to a ferocious crescendo, one you wouldn't expect with just an acoustic guitar and voice as tools, before he declares "I choose this motherfucker, and I choose it again."

It's an emphatic conclusion to the evening, one that underlines just how unique and special David Ford. Like him, we've abandoned any of the notions of the stardom for him that were thrown his way at various points in his career. Some artists are destined to go underappreciated and undervalued, but to those that are in the know that makes them even more cherished. He promises he will be back in the autumn with a tour that will be completely different to this one and he's a man of his considerable word.