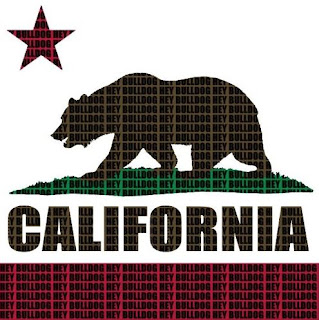 Hey Bulldog return with their first single of the year California ahead of a double A-side 7" single release later in the summer and their long-awaited debut album sometime in the winter.

What Hey Bulldog have done so consistently well over the course of their singles so far is to fuse their influences into their songs, but give them their own distinctive sound. California is a million miles away from their previous single No Future (Part II), but still exhibits the traits that have made Hey Bulldog an underground favourite in Manchester and further afield. There's an urgency to the bass-driven track that takes the listener with them, a looseness and fluidity to the groove of the song that exemplifies the trio's love of classic rock sounds as well as their knack of translating that love into something that demonstrates their creative and technical abilities that have won over their growing fanbase.

The song is inspired by a six-foot Californian underground musician and John Peel favourite called Rex Tatarex Thompson from the band The Summer Hits that Rob met several years ago before his untimely death.