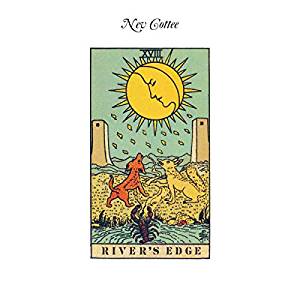 Nev Cottee's fourth album River's Edge is released this Friday, the follow-up to 2017's Broken Flowers. River's Edge is a wonderfully intimate album, soft and gentle in its approach with an intimacy that will draw the listener in and intoxicate them with his rough yet comforting voice as he sings about love and loss and the spaces in between, cementing his place in the hearts of those that have been fortunate to cross the path of one of the most underrated and underappreciated songwriters of this decade.

The album opens with Nightingale and a real contrast between a sombre piano and the sound of traffic in the background as Nev declares "time stands still, you're all alone" as strings come in to accompany the piano and then brass, seemingly in the distance, brings an even more solemn feel to lyrics about "the darkness falls, the nightingale sings" as the song's subject is enveloped in the cloying feeling of sadness of the song. Far from being morose though, it's the intensity that grips you. It's followed by recent single Roses, which is a duet with a mysterious chanteuse Veronica who Nev met when she was singing on the backstreets of Madrid. The pathos of the music is countered by a bruised optimistic romanticism in the lyrics as the pair sing "we'll sleep forever, fall off the earth, hand in hand together, I know you know it's the end of the world."

The mood is lifted musically on Hello Stranger, a sparse arrangement allowing Nev's vocal to take centre stage, every little nuance in his voice being audible, adding a richness and depth to the words he's singing before the song takes off with a long guitar solo. I'm Still Here is ushered in with a heartbreaking intro and Nev's vocal is afforded all the space it needs to deliver the tale of uncertainty and wrenching doubt, harmonies drifting in the background adding to the intimacy of the words that declare with a weary conviction "I'm still waiting for you every day, my mind is clear, nothing's changed and I'll still feel the same."

Two songs at the centre of the album - River's Edge and The Hollywood Sign - both clock in at less than a minute and a half. The first in particular has the feel of a raw demo, but one whose simplicity, like much of the album, makes it feel even more genuine in the emotions that Nev is putting on show.

Local Hero starts with intricate guitars and then sets Nev's world-weary ground-down voice to a pedal steel and a simple repetitive drum beat. Like much of River's Edge, the beauty is in the way that every sound you hear is there for a purpose, there's no overloading, no attempts at clever trickery, the focus on creating something that, even when the lyrics don't send you down that path, gives you that warm feeling that you get when an artist is letting you into their world and sharing their deepest set thoughts. Morning Sun starts with just an acoustic guitar which allows you to hear every little sinew of emotional turmoil in lines like "in the rag and bone shop of my mind, loneliness hides behind a smile" which express the weight on well-being of relationship breakdown.

You Can Help Me lightens the load, the optimism of its title coursing through the veins of the song providing some light relief from the heavy load of the most of what's gone before. The album concludes with Scattered Leaves, another song that benefits from the two-week recording process of the record that means songs have not been pored over in intricate detail and are better for that because everything is very much visible from the surface, like we're listening to a process of catharsis and expulsion of demons and dark thoughts with the first shoots of optimism and recovery poking out.

River's Edge is a wondrous record, perhaps not made for these times of instant gratification. It's best listened to late at night in a dark room where the songs can envelop you, reach under your skin and put you in the shoes of the artist. The rich evocative nature of Nev's voice means that how he sings is almost as important as what he's singing in imparting the stories he's trying to tell. It's a rewarding album though if you let yourself immerse in it, give it your undivided attention and appreciate the talents of a man who should be up there with the feted songwriters of the city we inhabit.

The album River's Edge is released on Friday (June 29th) and is available to pre-order digitally, on CD and vinyl from Wonderful Sound's Bandcamp page.