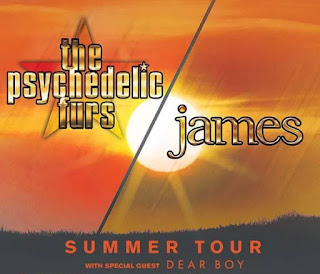 James' long US tour with the Psychedelic Furs rolled into Buffalo last Friday night, the band's first performance in the city for twenty-five years. IKWIHF covered the show for us, noting the band's appeal to a younger audience who connected to the newer songs from Living In Extraordinary Times and the message in those songs.

It’s a hot humid day in Buffalo. James are playing at the Canalside Park, on a stage about 40-50 metres from the canal. It’s an interesting setup for this outdoor concert: about 400-500 people paid an extra $30 for VIP tickets which meant that they had an area of 100 metres in front of the stage blocked off for their exclusive use, plus about 30-40 toilets and a huge bar area for which two drink tickets are included in the price. Others who had paid just the $10 ticket price were on the other side of the barriers.

Due to the strict 10pm curfew, Dear Boy started at 5:55 and played until 6:30. James started at about 6:50 and were on for sixty-five minutes, whereas the Psychedelic Furs on at about 8:30.

For the first time on this tour, James were joined by their 8th touring member, Chloe Alper as keyboardist/ percussionist/ backing vocalist, who unfortunately had run into visa issues which took a while to sort out.

As a result of having the full touring band together, the night started with the James drum corps introducing the crowd to Hank. Tonight this song sounds just breathtaking live. Oddly enough though, the anti-Trump lyrics of Hank seem to result in a noticeable pause in a lot of the older members of the audience, whereas the younger concert goers join in with James rather enthusiastically. And at the end of the song, Tim Booth can’t help but state he’ll be told to go back to where he came from. Saul, never one to let an opener to be passed over, asks if that means Tim will be going back to California where he’s been living the past few years.

James then work hard and succeed to draw in the entire audience with old standards Ring The Bells and Say Something. Three other Laid album songs are well received by the entire crowd, with title track Laid making a surprise appearance mid set and bringing the audience to a peak of joyful exuberance.

Through the main set, James go on to do wonderful performances of three more Living In Extraordinary Times songs: Leviathan, What’s It All About and Many Faces. Curiously, the audience age gap issue that was apparent at the start of the night with album opener Hank reappears with each of these three songs. This is particularly the case with the main set closing pro-humanity sing along Many Faces. Many older attendees are quite hesitant to respond to the positive message of the song, whereas younger audience members join in wholeheartedly.

This audience divide comes to a head as James momentarily leave the stage before an encore. Younger audience members cheer wildly for more, whereas a lot of older attendees are rather non-committal.

As before though, upon their encore stage return James work hard and succeed in drawing everybody on board with the deft delivery of Getting Away With It and the old singalong Sometimes. Everyone seems to be happy at the close of James performance, and the band hold hands and bow to the audience before decamping.

As has happened at the other James shows I’ve been to in July, younger audience members leave in droves once the band has finished for the night. This night though, due to the curious VIP arrangement, they are replaced by a number of far older attendees who have spent the evening in the large VIP bar tent.

James played Hank, Ring the Bells, Say Something, Leviathan, Nothing But Love,  P.S., Laid, What's It All About, Come Home, Many Faces and an encore of Getting Away With It (All Messed Up) and Sometimes.