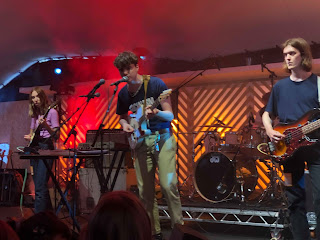 Working Men's Club opened up the first of three nights of some of the best independent talent in the North West curated by Dave Haslam that puts the Manchester (and surrounding areas) into the Manchester International Festival. A half-hour set in a packed tent felt like it was a turning point for the band as they celebrated the release of their second single Teeth today.

The local hype machine has been in overdrive for Working Men's Club recently with us as part of that. The accolade of "best new band in the country" is one easily dished out but very rarely actually earned, but once in a blue moon (or every couple of years) a band comes along that takes that albatross in their stride as they find their collective feet as a unit and continue to grow and flourish rather than sink under the weight of expectation.

At the end of their set Dave Haslam, shirtless to mimic Syd for the second half of the show, tells us we'll remember this night, where we were as a defining moment. The internet has killed forever the mystique of nights like The Sex Pistols at the Free Trade Hall, or The Roses at The Hacienda or Oasis at The Boardwalk, such is the way everything is shared however small. But tonight feels like nights in recent memory - Blossoms at Academy 3, The Slow Readers Club at The Ritz - where something changed. An endless stint of support slots - and we have to remember tonight was too for new label mates and friends The Orielles - has allowed them to grow without the pressure but often as the reason the room was packed. 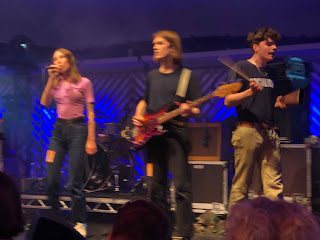 A few months ago, their debut single Bad Blood stood out a country mile in a set from a band that exuded immense promise and potential - and the excitement was in what they could do, more than what they did do. Now every song is right on the money and Bad Blood remains a highlight but doesn't raise the bar. Aided by the best sound set up we've heard them have, Summertime has a magical urgency and thrust that every gig opening song should have and Cook A Coffee (once called Defecate On The BBC, but changed given that the station is going to play a massive role in their future - although the line "you look like a cunt and bark like a bitch" will probably remove any chance of playlisting) has an energy and anger that any band with the pretense of sounding political or making social commentary would do well to take as their blueprint.

The songs where Guiliana takes on lead vocals see Syd prowling the stage like a mad man smashing merry hell out of a cowbell and they give a different edge to Working Men's Club that your run of the mill four piece simply don't possess. They finish with their new single Teeth and Syd, angry at the over-zealous security for a fairly tame moshpit, dispenses with his jacket, climbs the barrier and joins in, leaving his microphone behind somewhere in the chaos.

Amongst the Guardian deckchairs, the gin and prosecco bars and artisan pizza stands of the Manchester International Festival with its art installations, cholera brewery tours and four hundred quid David Lynch prints, tonight felt like something special had happened for free and exactly in keeping with the spirit of this city's real cultural history.