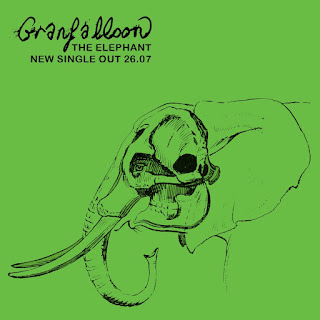 Granfalloon's latest single The Elephant is a taster from their forthcoming second album. We're delighted to be asked to do the online reveal for the single after it was previewed on BBC Introducing last weekend.

Granfalloon, aka well-known Manchester sound engineer Lomax and friends, told us about what The Elephant is about - "Have you ever felt utterly overwhelmed? The Elephant is about that very feeling." It's reflected in the lyrics which talk to the need to break things down into manageable chunks rather than trying to do everything at once, including an old saying from Lomax’s mother that “you can’t eat the elephant whole” and a phrase from one of the band Peer Van See’s German mother sung in that language - "Man kann sich nicht jeden Schuh anziehen, wer über Wasser geht, der muss Barfuß gehen" which translates as "you cannot wear all of the shoes, who wants to walk on water must do so barefoot."

Email ThisBlogThis!Share to TwitterShare to FacebookShare to Pinterest
Labels: Granfalloon