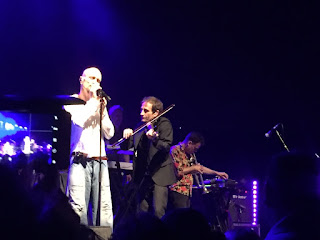 James opened their North American tour with The Psychedelic Furs on a steamy night in Toronto. Our friend IKWIHF was there to report back on their long-awaited return.

It’s a hot humid night on the Toronto waterfront, as a good portion of the crowd wait in anticipation of James’ first appearance in Toronto in nine years, an obscenely long wait. Fortunately the Rebel Complex venue was nicely renovated the other year, turning it from a sloppy re-purposed warehouse into a proper as well as air conditioned music venue with a decent sound system, clean sight lines and even a thin balcony in front of the stage.

It’s a strange tour arrangement with co-headliners James and the Psychedelic Furs. However James do the first set just before 9pm, as they do the next night in London Ontario, which seems to suggest that James are relegated to openers for The Furs. However, it becomes apparent in the opening moments of their set, that the majority of the crowd are there for James, not surprising given that Toronto was one of the real heartlands of James' North American fan base when they threatened to take over the continent, giving them a raucous and long welcome back to town.

Though obviously jet lagged, and as a result a bit off their game, James launch right into work with Come Home accompanied by the many would be singers in the crowd. With only an hour available to James tonight, they unfortunately have to limit themselves to only four songs from their latest album, Living in Extraordinary Times. The newer materials and their often anti-Trump messaging are strongly received. New love song Leviathan surprisingly just sweeps away the crowd. It's a shame that James hadn’t the opportunity to promote this album when first released last year as it really seems to connect with North Americans.

That said, the newer songs sound a bit different than on record and during last spring’s UK tour, perhaps due the elimination of the two backing singers / percussionists, likely due to the economics of this North American tour. However, if James had started the night with Hank, which introduces their new sounds featured on Living in Extraordinary Times, and included Better Than That in the setlist they would have taken no prisoners.

As is usually the case when James play in North America, the Laid album contributes a disproportionately large number of songs to the set list, tonight providing about a third of tonight’s maddingly short set list of ten songs. Unfortunately Sometimes has a wobbly start but James and assorted off-key chorus singers in the crowd enthusiastically save the song.

Nothing but Love is resurrected from Girl At The End of the World with refreshingly new instrumentation and a co-vocal by Andy if I recall correctly. Getting Away With It gets its usual ecstatic audience response even though the Pleased To Meet You record was neither released or toured in North America.

James however do not let their exceedingly short set time suppress their sense of humour. In the midst of introducing crowd sing along Many Faces towards the end of the night, Saul launches into a Neil Young imitation with a short take of Heart of Gold followed by a few Neil Young praising anecdotes from Tim. As they prepare to start their last song of the night, the opening notes of mega-long jam closer Sound are heard after Tim announces they were thinking of doing a 15 minute closing jam. You can just imagine the Psychedelic Furs manager having a heart attack at the sound of this.

The night closes though with a rousing take of fan favourite Laid. Boos accompany the house lights as they come on not preceded by a James encore. Interestingly, a lot of ticket buyers, in particular younger ones, leave the venue with James done for the night.

James played Come Home, Heads, What’s It All About, Five-O, Nothing But Love, Leviathan, Getting Away With It, Sometimes, Many Faces and Laid