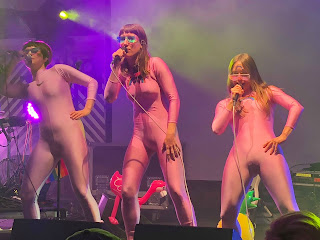 For those of us not interested in the artistic extravagance of most of MIF's program, the tent in Albert Square is something of a haven with free live music on offer to complement the very un-Mancunian sunny weather. Saturday night saw Stealing Sheep bring their colourful live show for an hour performance that was as much a theatrical performance as it was a gig.

Stealing Sheep have gone on quite a journey since we first saw them as a indie-folk three piece back at the start of the decade and it's been a fascinating transformation they've gone through, both musically and visually. As the curtain drops down as an electronic backing track kicks in and Becky, Emily and Lucy, resplendent in full-body pink leotard adorned with a rainbow across the chest, stood centre stage, moving their arms to the music. Any confusion in the crowd is dissipated as they separate and start playing, their set focusing on their recent third album Big Wows, full of big beats that feel perfect for the sultry early evening weather conditions and a curious audience that's a mix of the MIF crowd and fans of the band. 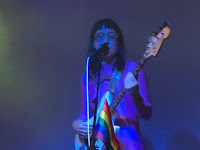 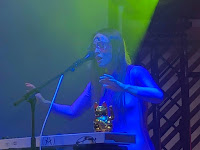 The likes of Jokin' Me, Show Love and the album's title track get the audience moving, something the band, Becky in particular, very much encourage. It's an interaction that really works and avoids the audience getting distracted and chattering, which is no mean feat on a sunny evening where the beer and prosecco is flowing. Whether it be the kids down the front waving their rainbow flags handed out by Becky, the way they get us to sing along to songs most of us don't know, the inflatable shark that gets launched from the stage or the way they handle the malfunction of the illuminated windmills they hold up in an intermission between songs, they do because they transmit the fun that they're having on stage to the audience and do so with songs that are irresistibly catchy. They share lead vocals, layer harmonies or sing in unison to ensure everything stays fresh and exciting. 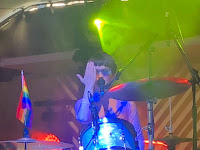 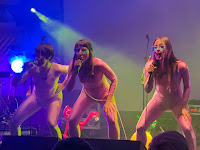 By the end of their fifty-minute set and take off their shades to reveal glittered up eyes to a rousing response, they've charmed the crowd into submission. They've done so by putting on a show that's both light-hearted and fun but with a message. In a world where music can be too dour and serious, Stealing Sheep are a glorious alternative; a real show rather than a series of songs tagged together, smiles and grins on and off stage that would light up any room and songs that's it's impossible to find yourself not tapping your feet to.