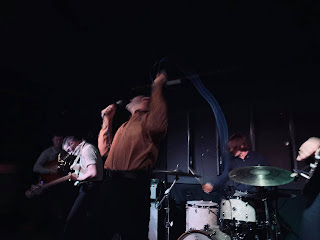 The Murder Capital continued their seemingly endless tour with a Saturday night debut in Sunderland at the Independent, one of those wonderful small venues that's fighting against the odds in towns and cities off the usual circuit, supported by local heroes Roxy Girls.

Roxy Girls' songs seem to start off at a hundred miles an hour and accelerate from there before grinding to a halt in under two minutes. There's an urgency to them and a real effusive energy to the likes of Taxi Car and recent single Trials And Tribulations that it's impossible to not be drawn into if you pay them the attention any support band deserves. 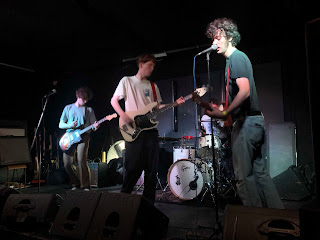 Tom's vocals have an urgency to them that's replicated in the music. Bands of this genre often slur their words which often makes distinguishing them impossible, but he makes sure we hear every one of them and if we couldn't hear, we'd be able to lip read them, such is the focus he places on expression. They say little, surprising as they're a local band, but that allows them to play more of these short sharp songs that make a very positive impression indeed.

The Murder Capital enter to a searing wall of pedal feedback, a sign of the confrontational nature of their sound to come, challenging the audience to listen and immerse themselves in the music, to put themselves into James' head and face the demons that come out in the songs collectively. Damien, Cathal, Gabriel and Diarmuid appear first, creating the swirling cacophony of opening track More Is Less which sets the pulses racing and has them accelerating to the point where James declares "I kept your belongings for the sweetness of your smell and I love it." The song drops then comes back, agigated, schizophrenic and absolutely intoxicating.

Feeling Fades starts with just James's vocals, harder, rougher around the seams than the recorded version, something that is a theme for the whole set vocally and musically, but which serves only to make it feel like we're living these stories as one. Unity, "those streets kept us all together" in this song is a reference point that we come back to regularly during the set, with music and friendship the glue that holds everything whole and prevents us breaking and shattering into a million pieces. The song gets more and more ferocious as it continues and you sense some of the crowd are taken a little aback by the sheer power of it, something James notes when he thanks us for the massive applause at the end of the song. We're still a little gob-smacked.

Most bands three songs in would leave their big-hitters to the end, but Green And Blue is next, in parts almost unrecognisable from the recorded version. The rhythm section simply takes the song apart and pieces it back together with the sharper edges protuding, prodding, stabbing and puncturing us into submission. There's little of the chatter you'd expect for a band playing its first gig in town and with little radio play because people are simply blown away or are too scared to open their mouths. 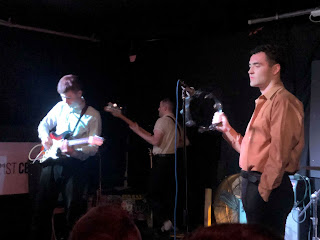 Slow Dance Part 1 does what the title suggests and brings the pace down. It's claustrophobic, cloying and intense as James emphasises every single word, then goes silent lost in his own world as his band mates create mayhem around him and departs for the instrumental Part 2. Like their front man, each of the band seem to be lost in their own individual worlds too yet irrevocably connected and providing the inspiration for the others to continue. We can do nothing but immerse ourselves in it and allow it to cover and protect us. For Everything starts with a menacing rumble with lightning bolts of guitar strewn across it, rhythmic drum patterns almost tribal in the way they punch through the heat in the room, then stop dead and start a different beat. As the song takes us with it on its journey, it feels like there's five or six songs in there as it takes every twist and turn and blind corner that comes up in front of it until it finishes with just drums and James repeating the mantra "for everything, for nothing" 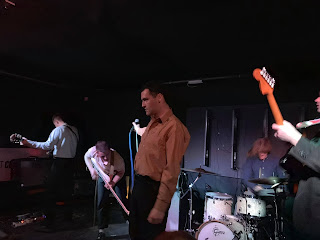 "Who's here with their friends? Noone? You're all here alone, that's beautiful in its own way" James asks before telling us that "we are best friends and we remind ourselves to tell each other we love each other, because one day we won't be there, it's important to remember, this is a song about not forgetting" reducing us to an emotional wreck before the haunting funereal opening bars of On Twisted Ground have even kicked in. A few clattering glasses in the background feel somehow appropriate, but the song has us in floods in tears as James reflects on the suicide of one of his best friends. It's sparse musically which simply accentuates the heartbreaking impact of the song. It's exceptionally brave to lay yourself this bare every night in front of strangers, facing up to his own demons and hoping that it will save at least one person who's feeling totally lost and alone - but it is one of the reasons why The Murder Capital might just be the most important band in the world right now. Applause at the end feels somewhat inappropriate, you want to get on stage and hug them - for their good as well as your own.

"In celebration of death, this is called Don't Cling To Life" James tells us introducing their most recent single as the pace is picked back up to breakneck speed, chaotic, teetering on the edge of losing control and setting the blood pulsing through the veins at breakneck speed, leaving us breathless. They finish with Love Love Love, one last punishing assault on the senses designed to break down any inhibitions we might have to express ourselves rather than hide everything inside and not share our darkest moments. The chorus, just the song's title, feels like a command, an exhortation and the most important command that you will ever be given. They leave us as they came in with a wall of pedal feedback.

By the end we're absolutely spent. Music is so often a form of entertainment and release, an escape from all the bad stuff that's going on in our lives and in the wider world. The Murder Capital face this head on, their intent not to entertain but to challenge us to be brave, to face the darkest of thoughts and look them in the eye until they back down because that is the most effective way to suppress them. Theirs is a message of love, borne of loss, of friendship being the most important thing in the world, the oxygen that allows our mind to function and that it is OK not to be OK as long as you don't allow yourself to sink into the abyss.