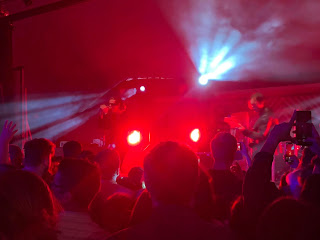 The Blinders headlined night three of live music curated by Dave Haslam in Festival Square as part of Manchester International Festival. Mixing in new material with tracks from their debut album Columbia, they set the tent bouncing more than has seen before ably supported by Witch Fever and Pagans SOH.

The Pagans SOH, or The Pagans Shepherds Of Humanity to give them their full title open up proceedings. They describe themselves as a fusion of "hip hop/punk/funk/jazz/metal/reggae" and we'd add rock and country to that mix based on tonight's set that goes down a storm with an initially curious audience. 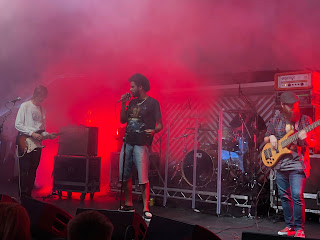 Front man Marcus is the real focus of attention, spitting out words with an assured confidence and belief in the message he's imparting, whilst his band mates create the complex sonic palette that all of their influences coming together paint for us. The songs shift pace and direction almost at will, ensuring that even the casual listener is kept on their toes - with recent single Pagan Pilgrimage in particular getting a strong response from the crowd past the devotees down the front.

Witch Fever are next up, unapologetic in stopping the show mid-way through to emphasize their message that women, trans and non-binary folks should be treated with the same respect as men, both in the music industry and in wider society, a message that shouldn't need repeating but which sadly does over and over until people take notice and act on it. 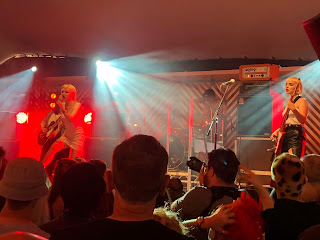 What they do so magnificently is channel that anger through their songs and their music - and it'd be remiss and insulting to label them simply as a protest band when they are much more than that. Whilst many DIY punk bands often lack focus, Alex and Annabelle's rhythm section give the structure and space for Alisha to take the lead on guitar and craft these powerful songs to hammer home the message of Amy's frenetic delivery, fueled as she admits twice by nervous energy as much as adrenaline, lost in the music and in one moment out among us in the crowd. When her and Alex engage in call and response vocals it lifts the songs still higher. Their last single Daddy Part 2 is a case in point, taking no prisoners en route to delivering a short sharp kick to the bollocks of misogyny, whilst some of its perpetrators throw themselves around to it oblivious.

The Blinders take the opportunity to introduce four new songs in their forty-five minute set as they start the process of moving on from their debut album Columbia and they know they can do it in the safety of friends tonight as the tent is packed to the rafters with most of those who've caught onto the ride of their unstoppable upward momentum over the past three years since they moved to Manchester and worked their way through the city's venues one by one. The new songs - The Writer and Forty Days And Forty Nights in particular - feel like a progression, not cutting all ties to what's gone before but taking them further, the latter creating a mosh pit the equal of most of the better known songs around it in the set. 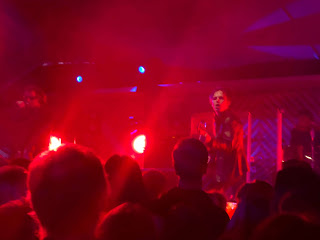 This moves the traditional opening salvo of L'Etat C'est Moi and Brave New World towards the end of the set and discards Gotta Get Through completely which feels a little strange at first as they open with Et Tu and separate it from their set-closer Brutus, but this is a sign of a band moving forward, confident enough to reveal these songs and change expectations way ahead of the release of album two rather than play it safe. What's still there is their effervescent energy, Charlie almost conducting the mosh pit at points and Tom's rasping delivery of the likes of Rat In A Cage and I Can't Breathe Blues reminding us why so many fell in love with them in the first place.

Our recent interview with them can be found here and we covered their headline show at Manchester's Ritz back in April here.

Email ThisBlogThis!Share to TwitterShare to FacebookShare to Pinterest
Labels: The Blinders, The Pagans SOH, Witch Fever