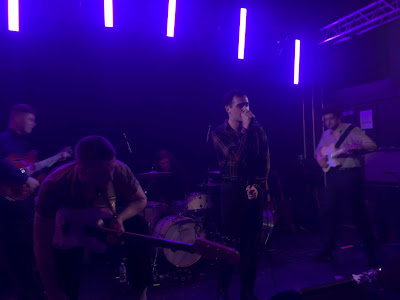 The Murder Capital brought their preview tour for their debut album When I Have Fears to the loft of Liverpool Arts Club and left another packed crowd gasping in awe at the intensity of their live performance and the revelatory insight they give into their hearts, mind and darkest thoughts. Support came from Brighton's impressive four-piece Egyptian Blue.

When Egyptian Blue supported The Murder Capital in Manchester back in May, we concluded that on any other night with any other band we'd have been leaving shouting from the rooftops about them. Two and a half months on, we're excited to see them and report back on just how much they've developed as a band, winning over an initially unsure Liverpool crowd with tracks from their recent Collateral Damage EP. The urgency of the almost title track Collateral where they bark at us "you should have stayed at home" has us on edge from the start, as does their constant changing of lead vocal responsibilities between Leith and Andy, two different styles that seem to fuse together perfectly as the songs take us on a rollercoaster journey. 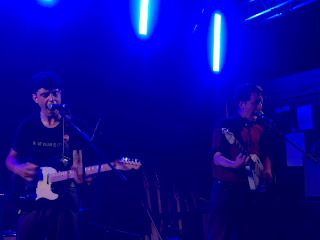 They don't say much at all, they simply let their music do their bidding for them. Beyond the EP tracks, there's a sense that it was the start of a journey, of a band having planted the seeds from which beautiful rough-edged flowers will prosper. They don't deal in your verse-chorus-verse-chorus-break-chorus songs but something much more intriguing and complex across their seven-song half-hour set.

As the last strains of a song called Dear James leave the room, the tour manager comes on stage, turns on the amps and hits guitar pedals leaving us a screeching wall of feedback as four of the five members of The Murder Capital make their way on stage. Through the white noise comes drums, tribal, raw, like a heartbeat that isn't going to stop pounding for the next forty-five minutes taking the heart, soul, mind and every breathing part of the body on a journey that saps every little bit of emotion out of those that connect with this extraordinary band. When they depart they take nothing off the stage with them, having given and bared everything as their own means of catharsis and exorcism.

James joins them, the guitars kick in then drop away to leave just the drums then roar back in. The Murder Capital never let you settle, like the darkest recesses of your mind that keep you awake all night when you're at your most restless, caught up in emotional turmoil and unable to discern white from black - the opening line of For Everything (and their forthcoming debut album When I Have Fears) "I am a blissless star, corroded through the core" sets the tone for an evening that leaves us totally spent by the end. James struggles to be heard early in the set, partly because of the sound mix, but mainly because of the huge sonic maelstrom that his friends, and they are friends more than mere band mates, create. The song explodes, drops suddenly, builds back and James' singing "for everything, for nothing" repeatedly, increasing in speed and ferocity as everything strips back to just drums feels like a mantra, a design for life. We're knackered and we're one song in.

More Is Less feels like a whirlwind, throwing us at a wall, picking us up and then hurling us head first across the room into the next one. "Who wants more? Give it to me" James exhorts as the song hits its breakdown, before the drums kick back in, providing the most explicit invitation to lose yourself to their beat. The rest of the band do just that, lost in their own world but connected to each other like on a life support machine.

There's no respite at all despite Love Love Love slowing things down, the song's chorus (of sorts) simply a repetition of the song's title like a beacon being held up in a storm calling out to rescuers to come and somehow pull them out of the cyclone that's threatening to suck them in. While some focus on the lyrics, "maybe in the rain, the romance will say goodbye" painting the bleakest of pictures, their impact is intensified because of the way the music heightens the tension, twists every single sinew. Slow Dance, in two parts the first with James and the second instrumental with him departed temporarily, is just that, transporting you a dark dark night, lying on the bed, wrestling with the demons and twisting and turning, unable to find peace just yet. 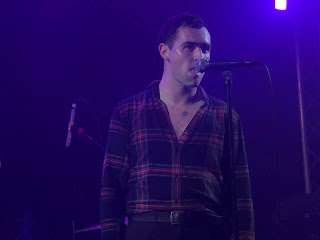 James returns to the stage through the crowd and addresses us with the most important single message he can give - "I'm lucky to have these four boys around me, never take your friends for granted." On Twisted Ground, a sparse, off in the far distance, almost not there, guitar providing the only accompaniment to James lamenting the loss of his best friend, laying everything bare in front of us as the last means of somehow coping. The room is stunned into silence, we're crying, the second we momentarily open our eyes we note others are too and then the guitars kick in and pierce through the sweltering heat and the claustrophobic tension. As it drops down one final time, you can hear James breathing heavily into the mic as if grasping for any little bit of oxygen. We can't recall a single song that delves so far in the abyss of loss.

Someone shouts "how do you follow that?" to which Green And Blue is the answer, a song so tight that it feels like it's trying to smother you in an emotional straight-jacket, once again Diarmuid's drums provide the framework from which the rest of the band cast their spell. There's a fluidity to The Murder Capital, the way they intuitively know what their band mates are doing, an umbilical cord that lets them take the song the way it wants to lead them. They change the set each night to order these nine songs how their head space dictates and the songs individually feel like they're afforded the same freedom. When you're baring everything every night you can't structure it and follow a strict routine and remain genuine - and this is why The Murder Capital stand out so much in a world that dictates you need to conform and salute the flag to succeed.

Don't Cling To Life follows, a hurricane of song, hurtling at breakneck speed in the wake of the previous storm, to sweep away any remaining stragglers. Again, the song feels like it's a mantra, a philosophy on how to live your life and survive the worst things that the world can throw at you - "failing this, let's dance and cry" evocatively expressing how music can rescue and save you and permit you to lose yourself and shut out the world for the three minutes of a song. It's the most powerful medicine in the world when administered in this way.

They finish with their debut single Feeling Fades, which sees James down on the barrier and Gabriel precariously perched above us close to the speaker stack. It feels like one final purge, one final exhalation of the remnants of the toxins that have infiltrated minds and bodies, music as the ultimate cure, a sedative for the hurt and an accelerator of love and healing. Guitars and drums collide and they leave us as they came in, drenching us in feedback from the pedals.

The importance of The Murder Capital though goes way beyond these songs. They are a coping mechanism for grief, for loss and all the catastrophic thoughts that come with that. At moments James kisses, rests his head against or engages in a three word conversation with one or other of his band mates and it cements an unbreakable bond that has formed, a shield of protection that's extended to the audience. They are about the world's most important medicine - the love that comes from friendship and the way it can help to protect you anything the world can throw at you. We worry that they can't keep up this level of intensity, that their schedule and their refusal to operate at anything other than full throttle might someday takes its toll and when they get to bigger venues the magic will be ruined by the ignoranti that think their conversation is more important than the music.  But for now, we need to celebrate The Murder Capital for what they are - the most genuine, no holds barred important band on the planet for one day they might no longer be ours.