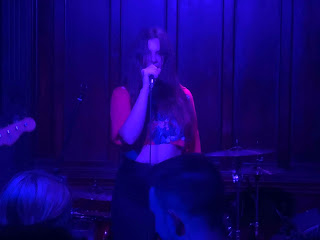 A warm evening outside always turn the intimate music room of The Castle Hotel into a sweatbox and tonight was no exception as first Glasgow's Aufbau Principle and then headliners GHUM battled against the heat to deliver two exciting and very contrasting sets to a packed crowd.

There's a dark foreboding element to Aufbau Principle's sound that you could probably extrapolate from their name. However, like many bands that trade in loud heavy guitars and pulsating bass lines, their sound has razor sharp edges of melody that protude through the wall of sound that they create with their dual guitar, bass and drums approach. 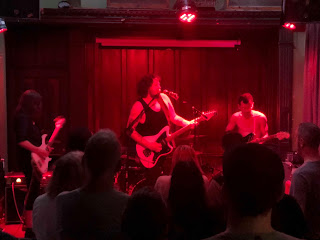 There's moments where they eschew vocals and feel like a heavy duty jam band yet there's also a targeted power and precision to the likes of opening salvo Abattoir and Consequences Of Feeling and early single Godhead. The unreleased Thief and their closing track, that uses the old stop / start trick before the song explodes back into life for one last assault on the senses, show that there's more to come from a band that get a great response from a receptive, if slightly sweaty, crowd.

There's something magical about GHUM. The first sixty seconds or so of the set, we feel a little underwhelmed as we expect a first-off hit between the eyes, but that anticipation only makes the hit sweeter when they let loose, the guitars start to fly and Laura lets loose with the full range of her vocals whilst Marina, JoJo and Vicki create sounds that make many of the post-punk comparisons that have been thrown their way seem a little lazy as they seem intend on creating a mould rather than fitting into one that's been placed in front of them.

All four songs from their recent The Coldest Fire EP are present and correct in an eight-song set that's short enough for them to not collapse under the exhausting heat in the room, but long enough for them to make an indelible impression. Shallow and Witches from their debut self-titled EP might now be two years old, but they've grown as the band have increased in confidence and stature, nailing the exact moment at which the song needs to lift both them and the listener and for Laura to take centre stage. 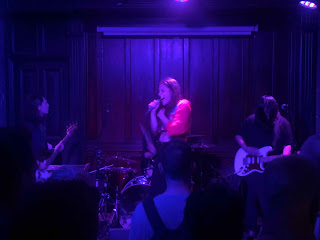 New song Kalifornia starts (we think) being sung in Spanish, a nod to the multinational make-up of the band and the way they've fused together the influences of their youth into a sound that feels very different from their counterparts - there's more joy in these songs that you'd associate with that post-punk label and a real excitement and energy as the songs explode into glorious light. Eight songs for a headliner might feel like we're being shortchanged, but it just leaves us wanting a lot more from them and itching to see them again.

GHUM are on Facebook and Twitter. The Coldest Fire EP is available on a limited edition of 222 from their Bandcamp.