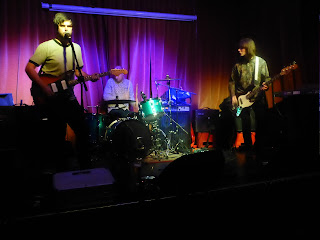 It's ten months since we last saw Déjà Vega play and they've got almost a brand new set of songs to blow us away with since then, of which new single Friends In High Places is just an entry point to their dark, loud, relentless and uncompromising sound.

From a town surrounded by soulless industrial estates with mile long straight roads, it's not surprise that Déjà Vega's outlook on life channeled through their music is a dark, foreboding one. There's much more to them though than simply turning up the volume and ramping up the effects pedals as so many bands do, their songs move instinctively, as Tom, Jack and Mike hardly swap glances all night, from section to section, from loud passage to quiet, leaving an audience spell bound in their wake. 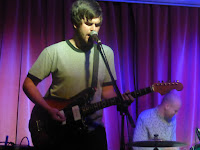 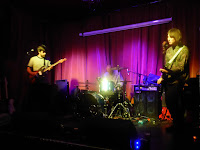 That ability to create a song of many seemingly disparate parts and to glue them together into something spectacular is something they've always had the ability to do, but time seems to have heightened the impact of it. They let loose half way through opening song Telephone Voice and almost deafen us whilst also setting us on edge waiting for their next move. The song comes to a dead stop and then kicks off again, but then the bass spins us round and dances us into Eyes Of Steel. For a band that creates so much volume, there's lots of intricate detail, particularly in their newer songs, whilst Jack's voice, rasping, always seemingly on the edge of ripping his vocal cords apart, dominates the quieter sections.

It's a pattern that runs through the set without the songs ever sounding like they're repeating the same trick, a difficult stunt to pull off given the three raw materials at their disposal, but that's testament to Déjà Vega's refusal to play by the rules. Friends In High Places, their latest single, is an absolute monster of a song, not suited for those of a weak disposition, yet there's moments in that and previous single Pentagrams where you know this is just crying out for the right audience to hear it and love and cherish it. It Takes More To Be A Daddy might be the song to find them that audience yet doesn't feel like they're compromising their approach, just adjusting it to create something that uses its power to seduce rather than blow away. 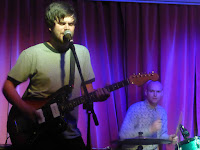 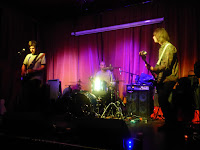 Another new song The Ballad Of Alfred Hitchcock is debuted tonight after only being written recently and starts with judicious use of samples of the great man's voice being slowly warped through effects and seems to suggest that the band are getting even more experimental in their writing. However, it's an old favourite The Test that brings the set to its conclusion with its foot to the pedal onslaught that it's impossible not to be swept along with.

Déjà Vega are unique, a band with an unswerving sense of their own purpose and reason for their existence that seem unfazed by not having had the breaks that newer and much less challenging and talented bands have found. They don't compromise in their goal of blowing the listener away and they succeed time and time again.

Déjà Vega played Telephone Voice, Eyes Of Steel, It Takes More To Be A Daddy, Friends In High Places, Pentagrams, The Ballad of Alfred Hitchcock and The Test.