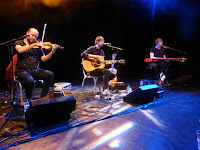 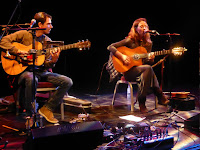 Taking a break from the recording sessions for their new album, Nick, Christian and Mike from The Leisure Society have taken off around the country on a week-long acoustic tour as a trio to recap highlights of their first four albums as well as to reveal intimate versions of songs from their next one. Support on the tour comes from Bea Sanjust, whose Larosa album is one of our favourites of the year, who met the band years ago in Brighton as they were starting off as part of the infamous Wilkommen Collective.

Bea is accompanied by Simone for her set of beautiful aching versions of tracks from Larosa as well as a cover of Rodriguez's Sugar Man. The setting of the studio theatre of The Lowry and the respectful attentiveness of the crowd meant that we could hear every subtlety in Bea's voice and the two of them's instrumentation, whether it be in the more delicate moments of the songs or when the songs become more expressive and you can hear as well as feel the emotion in her voice. 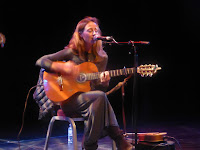 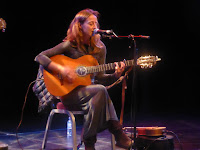 Highlights, if we can separate them out, are a fabulous Julia that demonstrates the range in Bea's voice and the set closing Two Sisters. Simone adds light and shade to the acoustic guitar and backing vocals at just the right points to ensure that the lush but fragile orchestration of the album isn't completely lost in the transition to the two person show. Instead we're treated to a set more than worthy of a headline slot and we hope that Bea will come back soon and we're not the only ones given the response at the end of her set.

This stripped-back format gives The Leisure Society opportunity to mix their set around and they certainly take full use of that, mixing songs from all four albums, the odd b-side and three new songs that demonstrate that they've still got their wandering creative spirit laced with a dark morose spirit combined with a wry smile and no little vodka consumption, as their stories throughout reveal.

They open with a new song called Arrivals And Departures that sets the scene perfectly, the stripped back nature of the set with just half the band present accentuates Mike's contribution on violin and requires them to improvise the others parts at times to make this work. The audience are silent throughout, attentively listening and breathing in some special interpretations of songs other for the odd good-natured heckler between songs.

The more intimate surroundings also allows Nick to take time out and explain the story behind the songs and their genesis - in summary, first two albums written whilst in a bedsit, sad and drunk on vodka, the third with writers block because of being happy and the new songs going back to their roots because of a "shit 2015." 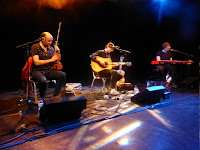 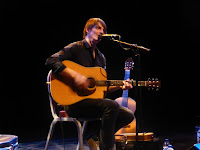 The set is a journey through their albums, leaning heavily on their debut The Sleeper with The Last Of The Melting Snow, A Short Weekend Begins With Longing, We Were Wasted, The Darkest Place I Know, Save It For Someone Who Cares and their opening encore track Matter Of Time.  The new songs - and there are three of them, the aforementioned Arrivals And Departures, God Has Taken A Vacation and A Bird, A Bee, Humanity - are all infused with a warmth that seduces the audience to the point their reception at the end is no less ecstatic than the more familiar songs around them despite Nick's joking that the audience don't want to hear the new material.

That humour is very evident throughout, Save It For Someone Who Cares is stopped then started several times as Nick and Christian laugh at the speed of the song's count in, whilst Christian later tells stories about Mike saying a Little Chef Olympian breakfast only resembles the Olympics because of ancient grease as well as other stories which Mike laughs slightly coyly embarrassed at.

Another Sunday Psalm, The Fine Art Of Hanging On, Better Written Off, Fight For Everyone and Forever Shall We Wait represent the other albums and what they do is confirm the consistency of quality that runs through The Leisure Society's work. The expanded version of the band may experiment in the way the six of them come together to perform, but at the heart of the band is the enduring strength of the songs themselves and stripped back this shines through bright.

They cover Erasure's A Little Respect and manage, somehow, to deliver it in their own style rather than it turning into a singalong mess that the song invites. They finish, as has become their tradition, unamped and stood inches from the front row of seats performing early track Pancake Day, which is evidently a real fan favourite given the response it gets.

All in all, the evening is a massive success, Bea's support slot introduced her beautiful music to an audience that would pretty much all be unaware of it, whilst The Leisure Society translated their songs to the stripped back format without losing any of the story-telling and emotional power that they contain as well as entertaining us with between song stories and laughter.

Bea Sanjust is on Facebook. Her album is out on iTunes now and the CD version is available via her Bandcamp page.