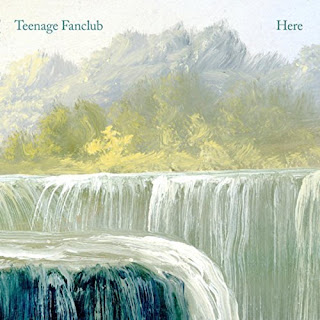 The much loved Scottish beat combo return with Here, their 10th long player and it will delight their army of fans.

Before the advent of social media and the internet, bands built a following the old fashioned way - write ups in the music weeklies, busy gigging schedules and maybe the odd radio session. Back in the early 1990s a young Bellshill band, who were reared on a healthy diet of Beach Boys, Beatles, Neil Young and American college rock (Husker Du, Sonic Youth, Dinosaur Jr, Pixies) had an impressive word of mouth following in not just their home town of Glasgow but throughout the country and beyond. They were musicians' musicians. Second album proper Bandwagonesque was hailed by many as the album of the year in 1991 and Grand Prix a few years later was for me the career highlight. Teenage Fanclub were always purveyors of fine melodies; indeed they are blessed with not one, not two, but three songwriters. Whilst drummers have been and gone (and come back again) at the core of the band are Norman, Gerard and Raymond who equally contribute songs to Here, their heartwarming new album about life and love.

I’m In Love is the opening track, lead single and every bit what we’d expect of Teenage Fanclub. A Norman Blake song, it has already gone down a storm at live shows over the past year. It sets out their stall for the album and features what the listener wants, expects and loves the band for - melody, harmony and some great guitar solos too. Thin Air, this time with Gerry taking the lead with a Byrdsian twist, is over too soon - a classic pop single before giving way to the more reflective Hold On which this time sees Raymond at the fore. Hold On seems like a return to the sound they found on the stunning 1995 Grand Prix LP. Norman’s The Darkest Part of the Night is mellower yet rich in harmonies and is a glorious toe tapper, with some delightful string accompaniments too.

Here is a fine collection of songs and a welcome addition to the Teenage Fanclub catalogue - songs such as I Have Nothing More To Say and I Was Beautiful When I Was Alive have a timeless quality. The former wouldn't sound out of place on an LP by their good friends The Pastels and it has a wonderfully subtle keyboard accompaniment from Dave McGowan.


As the album progresses, it sounds like they have saved the best for last. Raymond provides the album's most experimental moments on Steady State. Stripped of their trademark guitars, Steady State is a subtle, slightly psychedelic, Velvety classic and for me the best of the 12 gems on offer here. It's A Sign will surely be heralded as one of Gerry Love’s finest compositions to date.

Here is a very welcome return for one of our very best bands of the last 25 years.