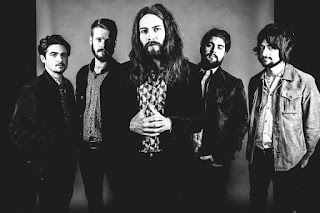 Feed The Kid release their new single In The City today and play an instore at Pretty Green as well as The Brit Project this Saturday.  We caught up with them for a chat about the single, its follow-up and their plans for the rest of the year.

First of all, could you introduce Feed The Kid and tell us a little bit about the band's history so far?

Of course, Feed The Kid was a temporary name that stuck. It was a joke name when we first started out. Needed a name fast and Smithy (Drummer) had just had a kid. The idea is we’d get paid and give him the cash, as he had a serious cash flow problem. We were young lads, think he was 19.

It’s been a learning curve, you can’t just be good, and sometimes you don’t even have to be that! It’s only now we have started to get a bit praise, momentum, and luck. Genuinely happy with how it’s all progressing.

Your profile has been growing around Manchester and further afield this year, what have been the highlights so far?

I think Dot to Dot was the first time we saw that something was happening and it was class.
Kendal Calling was few months after it, and it was packed. Having said that, it doesn’t mean it was a highlight.

Kendal Calling was an odd for us. Buzzing to be there again, buzzing it was packed, but we spent three days at the festival getting on it. I was a mess and went on stage in a bad way. It was very entertaining for people that new us, maybe a bit crazy for anyone on the outside. The band were pretty pissed with me. I am now on a three beer limit, not a three day limit.

The new single In The City is out next Friday. Can you tell us a little about what the song's about please?

Quick backstory, Ciaran and I moved in a flat when we started the band, and we have only recently moved out. The thought was that we have more time to write. In fact, we was sucked into a depressing repetitive slump of work and getting absolutely battered at weekend. There was no time to be clean, unwind, write and appreciate what was happening. Instead we was in a loop of nothingness. We had to move out to focus.

The song itself relates to any city, but is specifically, it’s about our rainy one. It makes reference to the capitalist culture we live in, and that we are working for someone and nothing. It’s not a new idea, and we are not taking credit for it, it’s just very relevant that our society is failing and we are left lost. The song however won’t leave you feeling depressed.

There's a second single in the pipeline too. What's the thinking behind releasing two so close together?

We have loads of music and are constantly writing. The band naturally grows, and so does the sound. Something that’s relevant now might not be in 6 months time. I think we are eager to get our sound across, and both singles are different.

There’s loads on at the minute. We play Victoria Warehouse at the Brit Project with Primal Scream on Saturday, then it’s Neighbourhood festival, the Single launch on 14th October with Radio X and This Feeling, and after all that we go on the road with Audioweb.

There's loads going on at the moment, and we are buzzing to be out there, and getting talked about.

I think scene is properly making a comeback now, and there's a lot of bands getting the credit they deserve.

It’s nonstop at the moment… There’s a few mad plans for 2017. I am unsure what we can divulge, so let’s come back to that.

If you had to describe your sound to someone who hadn't heard you, where would you begin?

There has been a few comparisons, T-rex, The Doors, Primal Scream, David Bowie (unsure what era), CCR, and quite recently due to the new stuff, we have been likened to Stone Roses. I am unsure if we are any of them, maybe we are an amalgamation of a few elements. I think it was NME who described it as something like ‘70s Rock n Roll grit’… that’s loose enough I think.

Email ThisBlogThis!Share to TwitterShare to FacebookShare to Pinterest
Labels: Feed The Kid