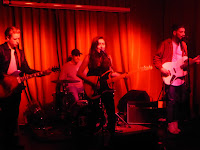 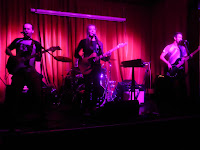 Braving the Manchester storm we made it down to Gullivers on Tuesday night to catch Scarlet, a band we'd followed since the start of 2015 but hadn't yet had chance to catch live as they prepare for the release of their debut album Effigy next month. Support came from The Orchid Hunters.

The first thing we notice when The Orchid Hunters set up is that they've got a lot of new kit. It's a sign they mean business and the seven songs that they play confirm this. The Way is confident, sure of itself, a mix of strident guitars and powerful drums and Beccy's impassioned vocal and Mr and Mrs Giggleswick is another that shows they've got an innate sense of big song structures. However, it's their penultimate song The Funk Song that impresses us most, it's a little looser than the rest of the set as they seem to throw off their inhibitions and let go and their final song leaves us with a similar impression too. The small crowd that's braved the storms loves them. 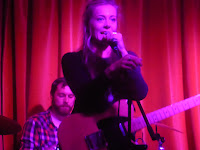 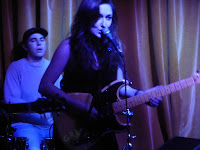 Scarlet are everything we expected of them and more. They've got three minute songs that dart between pop and rock, that swoop and soar, stop and start and grab you by the heart and make you fall head over heels for them. And they've got Jessie, a singer with real star quality who has an unquenchable infectious joy of performing that it's impossible to ignore - one moment singing as if butter wouldn't melt in her mouth in perfect pop tones, the next with an icy cold steel that you wouldn't mess with. And the band work the same way - one minute the sweetest melodies, the next rock hard shards of guitar piercing through you. They cram eight songs into half an hour, aren't phased by a snare drum that sometimes threatens to overpower their most melodic moments. 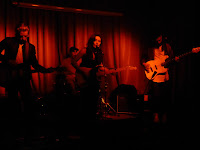 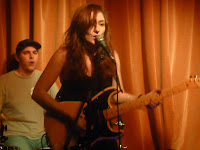 Recent single Your Control (which they reveal will open up their debut album) and Anyway (the lead track off 2015's Fishes EP) are both present and correct, but they're overshadowed by Remembering, final song Nothing and, in particular, a song that's down on the setlist as HOAL.  They all scream future single at us. Scarlet don't deal in extended solos, stretching out songs with padding past their optimum length - they know the value of a killer hook and a chorus that you can't get out of your head. The crowd that's still left, as we're running way over time, love them and rightly so. Their debut album promises to be something quite special.

Email ThisBlogThis!Share to TwitterShare to FacebookShare to Pinterest
Labels: Scarlet, The Orchid Hunters