Track Of The Day : Factory - Dynamite 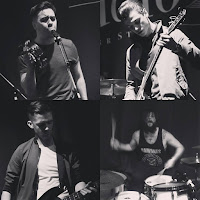 Factory are an emerging four-piece from Runcorn and they've just launched their new single Dynamite.

Factory are James Shelley are lead vocals and guitar, Karl Richardson on lead guitar and vocals, Tony Dainteth on bass and vocals and Benjamin Worrall on drums and percussion. Dynamite is the first track they've released since their Tomorrow Is Now EP.

Factory's Soundcloud page declares that you should "get in touch if you wanna dance" and Dynamite is their calling card for this. Its main riff straddles both the grooves of the Madchester era and the likes of early Fleetwood Mac and Led Zeppelin and fuses the two together to create something that feels contemporary - you could imagine people being more than delighted if The Stone Roses had come back with a song like this one. It almost fades out around three minutes but comes back in with a fierce sting in the tail for the final minute.

Email ThisBlogThis!Share to TwitterShare to FacebookShare to Pinterest
Labels: Factory