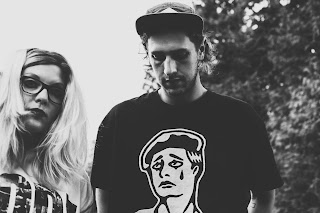 Skies are an exciting duo from Folkestone that with just a couple of single releases to their name have already gathered serious interest through BBC Introducing and have been invited to perform at Ramsbottom Festival on Sunday.  We had a chat with Alie and Jericho to find out more about them.

First of all could you introduce yourselves please?

Hi! We're Alie Cotter on electric guitar and lead vocals and Jericho Tozer on drums and backing vocals - and rumour has it, we're called SKIES!

And explain where the name Skies comes from - is it linked in some way to your music?

The name SKIES is thanks to Jericho's younger brother Joel, he used to be in Alie's old band and when we came to change our name he suggested SKIES and we went for it. It's a bold word, and the sky is big so it seemed to fit what our music sounded like.

You're based in Folkestone which hasn't got a reputation as a musical hotbed.  What's the scene like down there?

We love Folkestone, but you're right, it doesn't have a scene like London or Manchester does. It's a very arty town with so many creative people and creative businesses so I think the scene will only grow and get better and better! And we hope to be a part of that and help that happen.

You've had a lot of support from BBC Introducing Kent?  How did that come about and what doors has that opened for you?

Yeah, they've been amazing! Shout out to Abbie McCarthy and the team! We uploaded our music a while ago and they really helped us push our debut EP. They also put us on the line up for their 8th Birthday Party this year so that was amazing to play!

You're playing Ramsbottom Festival on Sunday after recently playing Scruff Of The Neck's showcase in Manchester, is it an ambition to play more shows away from the South East?

Yeah, we realllly love to jump in the van and play away from home. We have had a great time playing Scruff Of The Neck shows and we're really looking forward to the festival. We've heard great things about it so we're really up for it!

How did the Ramsbottom Festival slot come about and are you excited about it?

Mark from Scruff Of The Neck records hooked us up with it via our manager, Tom. It's always great to travel up the country... and everywhere is 'up' from where we're from down in Kent!

Your first London headline show is on October 19th at the Camden Assembly in?  Have you got anything special planned for the night?

We're so excited about the show! It's already sold a lot of tickets so we know it's gonna be a good night - which is great to know when planning towards it. We're playing a longer set than our usual 30 minutes - and we have plans to possibly include a cover, which is something we've never done before, and there'll be some brand new songs too! We're also sorting out the stage set and lighting now which is looking awesome, so hopefully the show should sound good and look good! Fingers crossed ha!

What are your plans after that show and into 2017?  Are you recording an album or can we expect more singles like Hold On?

We're about to go back into the studio in the next few weeks, we're looking at possibly a second EP, but we want to keep our options open and be flexible around any shows or tours we have in 2017 so we'll see how it pans out. Whatever happens, we'll have some new music out very soon!

If you had to describe your sound to someone who hadn't heard you before, where would you start?

We usually say something like a mix of synth / rock / pop / indie / emo / alternative. Hopefully they like one of those things and give us a listen!

They play Ramsbottom Festival this Sunday (18) and play their debut headline London show at The Camden Assembly on October 19.