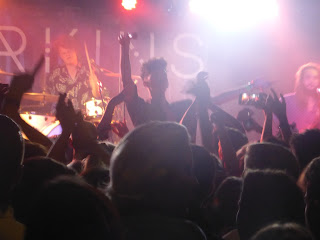 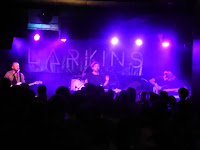 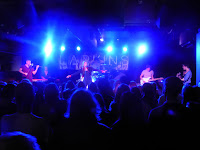 To coincide with the release of their new single Velvet, Glossop's Larkins played their biggest headline show yet at Manchester's Club Academy supported by Leeds' Victors and Manchester's own Young Monarch. A packed crowd watched Larkins impressively deliver a set rich in variety, power and crowd involvement and lay down a marker for the future.

Young Monarch are an interesting combination of styles and influences. They bring violin and sax into their mix of well-structured and heartfelt songs to create something that immediately stands them out from the crowd. Lead singer Rebecca delivers a performance that's bearing her heart and soul, arms outstretched welcoming the listener in and then holding us firm in her grip with her voice whilst her band mates create a sound that's always changing in mood and style. Recent single Gold is a stand-out track mid-set as is Caught On You towards the end of the set. They're definitely one to keep an eye on to see how they develop and embellish the multitude of influences that are going on in their sound. 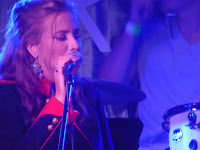 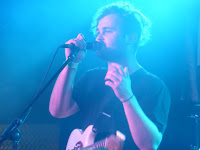 Victors are from Leeds and seem to have brought people over with them for the show and it's not difficult to see why they would build such a following. New single Feel builds on the previous single Two Hearts and these two songs mark them down as a band perfectly capable of delivering songs with a foot in both the rock and pop camps, both in their music and their look. However, it's when they slow things down in the middle of the set that they show a different more vulnerable side to them that hints at wider horizons as they develop as a band. It's a tough area of the market they're in as there's lots of bands in the same headspace, but Victors do enough to make us think they've got a fighting chance.

It's eighteen months since we first saw one of Larkins' shows and they're a band we've continually missed seeing because of clashes, so we're intrigued to see how they've developed and, quite frankly, they blow us away. From the moment they come on with a big build up, stage hardly visible because of the smoke and then, complete with a three-piece string section, begin their charm offensive with The Tide we're immediately struck by how huge they sound, how ambitious they are in their reach and it's a momentum that they keep up throughout right up to a lighters-in-the-air encore of Hit And Run and their previous single Sapphire. That they pull this off, and throw in an audacious cover of Beyonce's Love On Top mid-set that works perfectly, is testament to just how far they've come in the last two years.

Their appeal isn't just aural either, front man Josh Noble is a real rabble-rouser, getting the crowd involved (and just about staying the right side of overdoing it) whilst Dom, Matt and Henry revel in the extra space that the Club Academy stage gives them and they look natural and at home up there. They've got the songs to back up their bravado too - even when you take away the quintet of Hit And Run, The Tale Of Cassandra, Sapphire and their last single Let Your Hair Down and current one Velvet, they've got others ready to take up their mantle. 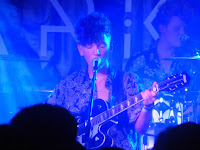 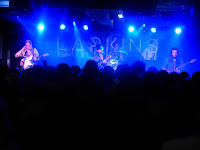 Riverbed shows that they can slow things down when the mood takes them and Squeeze is a big bold up-front number that screams potential single. However, it's Dragonfly that stands out a country mile as a huge dramatic song that we could see bookmarking their shows in future. The crowd participation doesn't quite work on it as the majority don't know it and Josh counters this by coming down to the barrier in true rock star style, but even that can't dampen the feeling that the song has something special about it.

As the evening finishes with a sea of raised arms and mobile phones and lighters, Larkins exceed all expectations with a composed performance that refuses to play it safe. It feels like a band grabbing their big chance with both hands and going for it. On the basis of tonight there'll be plenty more coming their way.