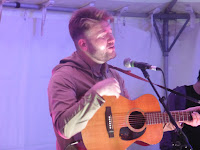 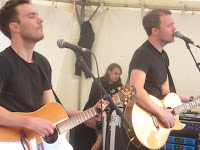 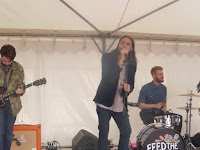 Made Here was the first (and possibly only) event of its kind to be held in the grounds of the Old Fire Station in Manchester before it's redeveloped into a luxury hotel concept and restauarants. A line-up of artists and street food vendors complemented the main attraction, a music stage in the stunning courtyard that provided free live performances from some of the city's best-loved under the radar acts. We caught the last three of them - Liam Frost, a rare acoustic set from The Slow Readers Club and Feed The Kid.

Anyone in Manchester who hasn't seen the Old Fire Station needs to. The courtyard and the buildings are an impressive statement in a city that's slowly diluting its cultural and social heritage ever more by the week. People who know more than me about such things think Allied are the right people to treat this with the respect it deserves, but it would be wonderful if the central courtyard space could host events like Made Here and bigger, like Manchester's own version of Somerset House in London. It won't happen, of course, as money dictates, so Made Here is likely to be the only event of its kind to be held here, which is a crying shame as it's a perfectly run event with something for everyone.

The health and safety regulations were not the most generous on capacity, so even just after 3, there's a fifteen minute wait to get in as it's one in one out so we only just about catch the last song and a half of Foxtales (or three of them Amy, Cassie and Angela) which is a real shame as we'd looked forward to seeing them.

Next up are Feed The Kid and they have gone for the full on band performance rather than stripped down although the noise rules mean they're restricted on volume, but there's far more to them that just noise as they demonstrate with a set full of soulful blues that's perfect just as the sun comes out and the beers and ciders start to kick in. The loss of volume doesn't dilute their power and impact, it merely emphasises their craft. Half way through the set they cover Bowie with panache, but it's their own material that really stands out. New single Century feels like an old friend already and Curtis brings it out to the crowd in his own inimitable fashion and gets the crowd out of their deckchairs. They're even granted an encore by the cheering crowds to top things off. 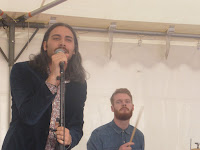 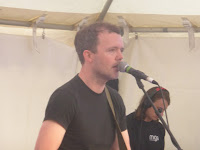 The queues outside have now grown to half an hour and round the block so there's probably disappointed people who don't get in to see The Slow Readers Club, or half of them at least, perform their quite beautiful seven-song acoustic set that has the biggest audience of the day and people right up against the front of the makeshift stage. Word has finally got out about them and tonight's crowd is a mix of the curious new followers and the hardcore who you can see mouthing along to every word.

Their seven song set pulls some surprises from their back catalogue as we're treated to rare renditions of Cavalcade, the title track of their second album, and Frozen from their self-titled debut as well as the welcome return of the set-closing Block Out The Sun, also from the debut. Stripped down the songs, like all great songs should, work fantastically well and you could almost hear a pin drop for most of the set as the awestruck audience are captivated by the way they squeeze so much emotion out of just two guitars and two voices. There's an emotional vulnerability to a lot of their work and this format brings that out in both the songs and in Aaron's voice, something that does often get lost in the power of their full band shows.  Kurt's backing vocals, often just simple harmonies rather than words, serve to heighten that tension and laying bare of dark moods and stories.

It's the two singles - Forever In Your Debt and I Saw A Ghost - that the biggest response is reserved for. The latter has the audience singing along to the refrain and it's poignant that a version that was recorded less than a mile from here in one of the city's other finest buildings has done so much for them as it was this song that Jim Glennie from James first tweeted to begin a beautiful friendship between the two bands. What The Slow Readers Club demonstrate today, as they have done all summer at Kendal and Victorious, however is that their success is their doing, people are drawn in by the quality of these songs, both lyrically and in the performance whether it be acoustic like today or their full band show that will fill The Ritz in a couple of months time. 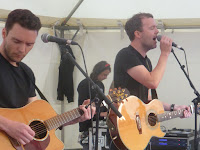 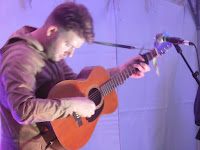 It's a hard act for Liam Frost to follow as the crowds thin out slightly, but he delivers one of the finest performances we've ever seen from him. Perhaps it's the tenth anniversary of his majestic debut album Show Me How The Spectres Dance being this weekend or the comedown from last week's two triumphant Deaf Institute shows, but there's a fire in his belly tonight. It makes the emotional rollercoasters of the likes of his opening song The City Is At Standstill and The Mourners Of St Paul's feel even poignant in this beautiful alcohol-hazed surroundings. There's a warmth and depth to his voice that can't help make you feel these songs, the harmonica in Shall We Dance feels so solitary and desolate that you can almost hear hearts breaking as he plays it.

He doesn't just play songs from Spectres though. He gets us all to join in Martha Wainwright's parts in how-the-hell-wasn't-it-a-massive-hit Your Hand In Mine and the three songs he plays from last year's Wild Places EP - its title track (complete with a section of Van Morrison's Sweet Thing), When I'm Alone and Who's Gonna Love You - show that he's never lost his ability to craft the most intense personal songs that translate to others that people can relate to. He announces that he's going to take a break for a while from the live scene while he writes a new record with The Slowdown Family so this might be the last chance for a while for us to hear some of these songs that stand tall and proud with anything that's come out of the city in the past ten years.

Made Here was a great success, an event that had something for all the family with some of the stalls, an environment where people could meet friends and listen to the music and the two could happen in the same space unlike so many locations. The line-up was curated fantastically to showcase some of the city's best talent and the sound was pretty much perfect to allow the quality of the acts and the subtleties of their music to shine through which is so often far from the case at such events. It'd be a travesty if there couldn't be more of these type of events, that the Fire Station couldn't become a real cultural centre and hub for the city that it's still lacking. Big business will no doubt dictate otherwise, but for one day Made Here made Manchester proud of its heritage and its here and now.