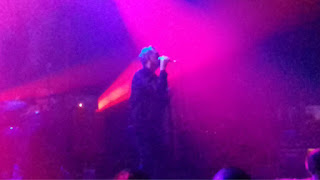 Warming up for a festival that never happened, Glasgow falls in love with The Jesus and Mary Chain all over again.

When these two Glasgow dates were announced some months ago, The Mary Chain intended to use them as a warm up for a London based festival this weekend. However, the festival appearance didn't happen and replacement shows in London and an additional Cardiff date turn this into a much welcomed mini tour, allowing fans old and new from all over the country to catch the band in more intimate surroundings. Before commencing, Jim dedicates tonight's show to Gary Watson of East Kilbride band The Lapelles who were due to open the show. Hand picked by Jim and William to play tonight, Gary died tragically a few weeks ago. The crowd warmly applaud in his memory.

From the opening onslaught of April Skies, The Mary Chain barely pause for breath over the next eighty minutes as they revisit their back catalogue. In recent years the band have taken their Psychocandy show around the world to great acclaim but tonight sees a completely different set, packed with pop nuggets from throughout their career. There are no references to the new album but that doesn't bother the crowd tonight - a real mixture of veteran Mary Chain fans but also with a huge twenty-something following too. The mosh pit is in full swing all night as the band rattle through Head On, Far Gone and Out and Blues From a Gun - each delivered with a precision and ferocity from the band, led by William, looking like a long lost relative of Doc Brown. Up front brother Jim is as cool and elusive as ever.

Lesser played songs like Half Way To Crazy, Between Planets and All Things Must Pass are welcome additions to the set. The former slows the pace down and adds dimension to the set. What's interesting about tonight's show is how timeless their material sounds. Like the very best of bands, The Mary Chain can't be pigeonholed. Their sound is as fresh as ever - even when William has his Marshalls cranked up really high, their melodies and pop sensibilities shine through.

Highlights? There are many - Happy When It Rains, a storming Reverence and Some Candy Talking all stand out.

The five song encore incredibly shifts things up another gear - Just Like Honey, Upside Down, Never Understand, Taste of Cindy and It’s So Hard with tonnes of feedback, perfectly round off the show to delight of the packed crowd.

The Mary Chain are our Velvet Underground. It is always a privilege and a pleasure to see them, especially on their home turf in such a great venue. The unsurpassed masters of rock n roll.