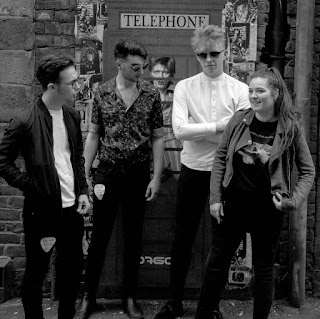 Ahead of their Ruby Lounge headline show we caught up with Sam Carson, lead singer of rising Manchester band Lunar about their exciting year and their plans for the gig, their next single and beyond.

We last spoke in March just before your big Academy 3 headline show. How did that go?

It was a crazy night man, it's a big fucking venue (for us) and it felt rammed. Walking around the venue knowing a lot of them were there for us was also mad. It felt like a turning point, we had a lot of people there who we didn't know but who knew us. We had our first crowd surfer too! I've got great distant memories of that gig.

You did When In Mcr Festival soon afterwards, but then you've been relatively quiet for a few months. What have you been up to during festival season?

Firstly, big up When In Manchester and the girls who run it. They're doing an ace job and we were treated like royalty at that gig! Since then we've been writing, rehearsing and travelling, as well as playing at Dot to Dot in Manchester. I've been in America writing over there on holiday and Christie's been away too. We were offered to play a few good festivals but we were away unfortunately. Next year!

It's still only just over a year since the first gig you did, what have been the highlights when you look back?

Everything has been a highlight, it's cliché but we've done more than we thought we could. There's the obvious highlights like going on BBC Introducing in Manchester, headlining Academy 3 and selling out our first headline show at Sound Control but there's also the stuff I never expected, like people singing along to us at gigs or recognising us on nights out.

And anything that's not been so good?

It's not all been easy but there's nothing I'd have changed looking back. Retrospectively maybe I'd have spoken to a few people differently, or listened to advice but it's all part of the learning curve!

Are there any special plans for the Ruby Lounge show?

There's going to definitely be new music, which is sounding brilliant. We've changed the set list around a bit too, apart from that if you've seen us before you'll know what's coming!

And who have you got supporting you?

We've got our good friend Ryan Jarvis on to open up. You should check out his new single. It's ace. We've also got King Kartel, who I'm a massive fan of and also The Hotspur Press who are also ace.

Can we expect some new songs at the show?

Yeah there'll definitely be new music. We've been writing all summer, so it just depends how many of them are ready by the time we play!

What are your plans for the rest of 2016 and beyond?

We've just booked in to record our new single 'Come Home' which will be out later this year, so there's that to look forward to. We're also planning on a few more out of town gigs, especially with me moving to Leeds. There may be something at Christmas... Who knows!

Lunar are on Facebook and Twitter. Listen to Showboater and read our chat with front man Sam Carson here.