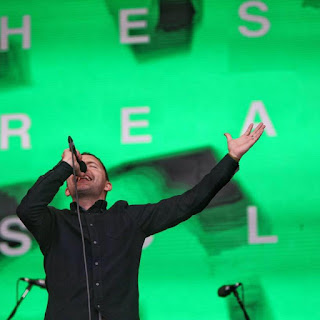 It's been quite a year so far for The Slow Readers Club. Hand-picked to support James on their massive Girl At The End Of The World tour, well-received and packed out festival performances at Kendal Calling and Victorious, a first sold-out trip to Ireland and on the brink of selling out their biggest headline show to date at The Ritz in Manchester, the year keeps on getting better.  We met up with Aaron and Kurt from the band to talk about their crazy year and their upcoming headline slot at Ramsbottom Festival.

You've had quite a successful year so far. You went out touring with James in May. How was that?

Aaron : That was amazing, nerve-wracking at first. The first one, in Bristol, that was the first time I remember being nervous in a long time. Backstage it suddenly dawned on me that it would be a cold crowd and a large crowd and I was taken aback by that a little bit personally. The big thing was to get over it, we knew what to expect. The size of the crowd wasn't a problem after we'd played Gorilla and St Phillips, but after going from some sort of level of local success where people know us and there was a vibe and a lot of feedback, there was this thing in the back of our minds that it was going to be weird not having that there.

But I think word started to spread on social media about us, James fans we could see were talking to each other about us and obviously the endorsements that we had from Jim and Saul did a lot to warm people to us. As the gigs progressed though it was fantastic and the support we had from James themselves was great. Jim and Saul watched pretty much every performance from the wings. They were great, they spoke to us at soundchecks, Saul would talk about specific tracks from the album and you could tell he really loved it. The respect from other artists, to have their endorsement is something special.

We'd been talking before the James tour for a while that if we could only get a break, get on a support slot, but we didn't know how to and it sort of just happened. They tweeted about us, we managed to get a CD to them. It bypassed the normal industry machinery where a label would put you forward. They liked us and they made it happen.

How did it feel going from that, playing to five thousand people at Brixton Academy and the MEN to going back the work the week after?

Aaron : Pretty weird especially when everyone got to know about it. Manchester Arena obviously people found out about as that wasn't part of the original deal as we jumped on it later.

Kurtis : For me it wasn't about going back to work as I've done that after gigs, it was more other people's perceptions. They think we've made it so they don't expect us to be back at work, but obviously it doesn't quite work like that, you don't make millions overnight.

There was a lot of social media response. Every time you played a gig, there'd be a stream of people with positive responses, far more than I've ever seen for a James support band, from people who'd never seen you before. How did it feel to come off stage or wake up in the morning and read all that?

Aaron : It feels great. It has gone from small numbers of people dotted around the world to ever so slightly bigger numbers. We've always found it weird, but very cool, that people from, say, Mexico have found us and bought a t-shirt. Anyone who knows the band will probably know Alessandro too, an Italian guy who runs our fan page on Facebook, a top guy, really passionate about the band. He posted the other day that there are people from Italy, Spain, Russia, Germany, lots of places across Europe coming over for The Ritz gig and that's barmy. We've had that at London gigs too.

We've got to a level now in the North West and Sheffield, Dublin and London are very good to us as well. We've gone from the Night And Day to the Ritz which is really exciting.  There's been a lot of social media activity that's helped and people like you writing about us.

But ultimately it comes down to the music, that's what sells you.

Aaron : Yes, Cavalcade has been incredible for us. It's transformed it for us, there was a moment also where we realised we needed to tour. We'd done a lot in Manchester before and odd small dates in London, but to be seriously we needed to tour. There's a perception thing, if you're touring then people look at you differently. You have to do things like going to Middlesbrough and playing to ten people, but it opens up other opportunites.

Some of those you'd secured before the James tour happened. It's not as if things weren't already building before that.

Aaron : Yeah, Victorious and Kendal were both before James. All those happened through building up other ways. Kendal came from doing a pilot TV show with Chris Hawkins from 6 Music and Kendal Calling were one of the people who were spoken to about that and they saw it and asked after us.

Reports from there said you packed out the tent, several thousand people

Aaron : Apparently the main guy was there and he saw two thousand there and it was really cool from our perspective.

Kurtis : Last year we'd have looked at it and wondered how we'd get anyone ear to even get on there, so to go this year and draw that sort of crowd was pretty amazing.

At Ramsbottom you're headlining the second stage on Friday night after playing the festival lower down the bill last year. How does it feel to be going back and being top of that bill?

Kurtis : It was probably my favourite gig of last year.

Aaron : It was far more receptive than we thought not having done it before.

Kurtis : We got asked about the main stage lower down the bill or headlining in there and it felt so great last year that it made sense to go and do it again. It's us then Public Service Broadcasting on the main stage and they alternate the stages so it's not like we're going to clash either so you can see one or the other.

Cavalcade came out a year ago. What are the plans for album three?

Aaron : We've got three that are almost studio ready which is more positive than we thought we were.

Kurtis : There's no words yet though (laughs)

Aaron : No, the main melody's there.

I remember having this same conversation about last minute lyrics last time round.

Aaron : I do like the danger of that though.

We've got other ideas, we've been back through our phone recordings of practices and there's ideas there but they're not fully formed yet.

Aaron : They get to a point where we develop them to a level where we then make a decision on whether we keep them or not.

So is the plan to release something this year or wait until 2017?

We'll probably wait until next year. What we did in the run up to Cavalcade was release Forever In Your Debt way before and I'm not sure we want to do that again. Hopefully we'll have the body of an album ready by the time we release something.

Kurtis : The other route would be an EP. We'll still do the tracks live though.  We have to balance between getting radio play and then having something to back it up once they play it.

Aaron : The focus after Ramsbottom will be the new material and the plan is currently to play a couple of them at The Ritz at the minimum and hopefully have something recorded by the end of the year. If they've got lyrics (laughs).

The Ritz is a pretty big gig, where do you want to take it next?

Aaron : I think it's to keep the ascent up. I didn't think we'd sell out Academy 3, then Gorilla, but I'm starting to believe a lot more now with what's happened that anything's possible. Kendal Calling, Victorious and Tramlines have helped, the energy and vibe, people even had a chant for us. With more exposure, support slots, we'll see what happens.

Kurtis : Let's book the Arena and see how it goes (laughs)