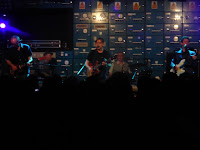 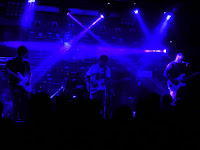 Ahead of the release of their tenth album Here this week, Teenage Fanclub have been treading the boards of venues a little smaller than they can comfortably fill to reveal the album to a dedicated fan base in the furnace-like crammed-in space of Gorilla in Manchester. Support came from The Wirral's By The Sea.
By The Sea have been around for six years now and in that time they've crafted themselves a place in the hearts of music lovers in the North West and beyond. Bill Ryder-Jones nailed it when he called them the least pretentious band around, their unassuming and unforced nature evident throughout their half hour set of songs that are so utterly disarming in their charm offensive that you find yourself falling for them without even realising.

As it's almost two years since their second album Endless Days Crystal Sky their set has quite a lot of new material in it, not that you'd know as they introduce one of the songs called This Could Be The Season. Like those first two albums, they have an intuitive feel for melody and song structure that instantly makes the songs feel warm and familiar without ever sounding like a copy of themselves or anyone else even though you're hearing them for the first time. You can hear the lineage of the Liverpool scene in them but it's never overpowering or overbearing, more a respectful nod. They finish on one of their early singles Waltz Away and the growing crowd give them a great send-off. 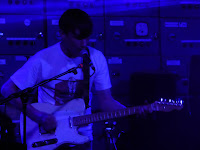 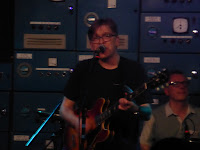 There's not even room to move, let alone wipe the sweat from our melting brows by the time nine o'clock arrives and Teenage Fanclub make it to the stage. Instantly you feel the love in the room, this is a band that's sound tracked thirty years of the lives of some of the people in this audience and you can see it in their faces as they recognise the opening bars of a song that saved their life twenty years ago when they were one of the few potent antidotes to the grunge takeover of the world.

When they conclude the main set with The Concept from 1991's Bandwagonesque and the encore with Everything Flows from A Catholic Education, the crowd's response is probably at its loudest, as you'd expect from most bands these days as these are the records that made people fall in love in the first place, but these are the only songs from those two albums as they focus on a set that spans their whole career, only omitting Thirteen and early limited-edition release The King, rather than cherry-picking the obvious crowd pleasers.

Not that crowd pleasers are a problem here as even the new songs from the as-yet-unreleased Here hold the audience's rapt attention. The set's heavy on mid-period albums Grand Prix and Songs From Northern Britain which between them make up almost half the nineteen songs and these demonstrate exactly the reason why Teenage Fanclub are so loved by their fans and fellow musicians. Lead and backing vocal duties are switched between Gerard, Raymond and Norman almost at will and seemingly without effort, songs lift and soar and those delicious harmonies kick in just the right place and time to lift the audience. 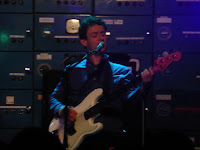 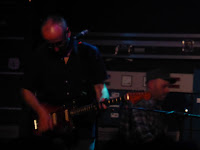 Those traits that seduced so many over the years are still present and correct on the four new songs from Here. They don't deviate too far from what has made them so loved, but to expect that would be missing the point as they make you fall in love with them each and every time on first listen. New single Thin Air, in particular, stands tall in comparison with anything they've done before. The Darkest Part Of The Night runs it close though, its bright, bold and beautiful refrains in contrast with the doom of the title. We'd have loved to have heard more of the new record if there's any criticism of the choice of setlist for the night.

They don't say much, to us or each other, as we've come to expect over the years, asking briefly for our indulgence with the new songs (and as we said four songs from a new record is far from overdoing it) and there's no big rock and roll gestures or showmanship on display either, but that's not what the crowd want. With this show selling out almost immediately and a much bigger date down the road at Academy 2 doing likewise, they show no signs of going anywhere and the love for them is still as strong as it's ever been.

Teenage Fanclub played Start Again, Don't Look Back, About You, I Don't Want Control Of You, Sometimes I Don't Need To Believe In Anything, Hold On, The Darkest Part Of The Night, My Uptight Life, Ain't That Enough, It's All In My Mind, Verisimilitude, Thin Air, I'm In Love, Your Love Is The Place Where I Come From, Sparky's Dream, The Concept, I Need Direction, Can't Feel My Soul and Everything Flows.

Email ThisBlogThis!Share to TwitterShare to FacebookShare to Pinterest
Labels: By The Sea, Teenage Fanclub