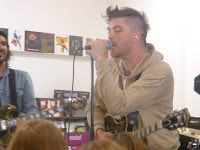 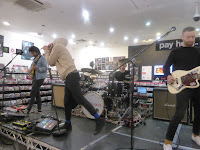 Twin Atlantic played a short five-song set at Manchester HMV on Monday evening to support the release of their new album GLA. Rather than strip things down as most bands do for these shows, everything's turned up to the limits of the in-store PA and take down the fence between audience and band to make it a far more up close and personal experience.

There's enough kit on stage for this to be somewhere like the Academy or Ritz and we're fearing for the makeshift set-up HMV have for these gigs even before the band make their way to the stage. We needn't have worried on that score as their sound man does a great job of delivering venue quality sound without compromising on volume or separation which allows the band to deliver a full octane set that's in contrast to many of the sedate stripped back sets we've witnessed in the store previously.

The band are up for it too. Front man Sam never stands still and during opening song and new album opener Gold Elephant : Cherry Alligator he jumps down off the small stage, smiles at security and opens up the barrier that separates him from the crowd who he ushers forward to the edge of the stage. It doesn't really get anyone more than a couple of feet closer to them, but it changes the whole dynamic as security wonder what to do when in truth they need to do nothing.

Twin Atlantic's modus operandi is to wear their hearts on their sleeve and play honest, uncomplicated rock and roll, the power coming from the delivery and Sam is the perfect band leader to do this. He plays half the gig hooded, jumps around like a man possessed and it feels like every word is being delivered as if it might be his last. He lives the songs and this transmits to his audience. 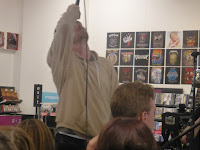 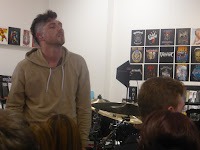 There's clearly a dedicated fan base here, girls jumping around at the front, others standing back singing along every word to a record that's been out a few days. It's impressive to note that GLA is their fourth album from a band ten years into their existence and they're communicating and forming a strong bond with an audience much younger than them. It's also a fine example to bands that don't succeed first time round (their debut album didn't trouble the top 100) to keep trying and stay true to yourself as the break may come.

The set, as it should be law to be at such events, is all new material, five of the strongest cuts from the GLA album. There's no holding back given the circumstances either and between songs Sam interacts with the audience with a smile on his face and no shortage of both humour and humility. The songs themselves are big expansive numbers with a common thread running through them, but without ever sounding formulaic or repeating the same trick over again. As we look around at people mouthing every word they've got that power of connection absolutely nailed.

We leave them to sign body parts and albums suitably impressed.

Twin Atlantic played Gold Elephant : Cherry Alligator, You Are The Devil, Ex:El, The Chaser and No Sleep.